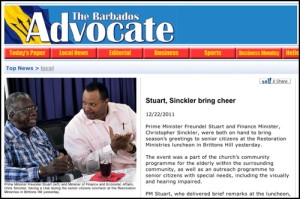 There’s only one thing worse than trying to depose the leader of a government – and that is to try and fail.

The Barbados Labour Party had their leadership coup over a year ago when Owen Arthur decided he was finished sulking and wanted his toy back. Quicker than you could say “Pass the rum”, Mottley was out and Goin’ wid Owen was in control again. Regardless of what the reality is inside the BLP, on the outside a year later the party looks stable and ready to fight the next election. And that’s all that counts with the majority of voters.

We’re all about image here in Barbados… nevermind that Arthur has a track record of 15 years of thiefing, abuse of power and negligence about the environment, public health and safety issues. The man is a leader, and the leader is in control.

On the other hand, as we approach the next election the Democratic Labour Party leadership is in disarray and appears factionalized as a result of the recent “letter coup”. Prime Minister Stuart came away still in power but weakened – and worse, he’s taken no action to demote or otherwise deal with the coup leaders. Is he weak? Is he fearful that the party’s foundation is not strong enough to allow him to publicly affirm his leadership? How will such weakness and instability be viewed by the swing voters? Or is it just more of the same hands-off “leadership” style that we’ve grown accustomed to from our “invisible” Prime Minister?

Bajans like leaders with strong public personas. Arthur has it. Mottley has it. Frundel Stuart does not. As a leader PM Stuart is about as appetizing to voters as porridge left out overnight and cooked up again the next morning.

That doesn’t matter to the DLP spin machine though: the party has decided that Stuart will lead them into the next election which, according to some, will be called sooner rather than later. So the DLP media puppeteers arranged for photos of coup leader Chris Sinckler and PM Stuart to appear together in the papers.

Just look at the photos: Nothing wrong here, folks – everything be just fine, so fine!

And if you believe that, I have some excellent vacant building lots to sell you near the Arch Cot caves.

Submitted by West Side Davie