Readers throughout the Caribbean deserve to see these photos and read the story of Lawrence Duprey and friends visiting the 2007 Monaco Grand Prix. After all – our grandchildren will be paying for Mr. Duprey’s crimes until they die. And yes, that is a US$100 “per cigar!” Cohiba in one of the photos. You can bet the wine isn’t from Tesco either.

Enjoy… but first a word about where this material comes from: Monaco Revue and DiversityCanada Foundation.

Although we are using this material under the Fair Use provisions of copyright because we are commenting upon the material and it is also public evidence of the crimes of Mr. Duprey and his gang, and therefore contains an overriding public interest in its publication at BFP, we ask each of our readers to visit Monaco Revue HERE to read the original material.

It looks like DiversityCanada Foundation and Monaco Revue have worthy goals and we encourage each of you to at least visit their websites and give them consideration.

We do note that according to the article, former Trinidad government minister Carlos John (and then “advisor” to Lawrence Duprey) is the “compatriot” of Monaco Revue’s editor.

We also see that what was once an article about the elites having a good time in Monaco is now certain to be of interest to the Colman Commission inquiries into the CL Financial Fraud. Especially as the commission looks into the close relationship between Duprey and Ministers and former Ministers of the Trinidad & Tobago Government. This 2007 article is evidence of crimes and has a compelling public interest. Therefore we have been advised that the Fair Use provisions of copyright are exceptionally strong and allow us to publish the material here at BFP.

We hope that DiverstyCanada Foundation and Monaco Revue have the journalistic integrity to leave this information published at Monaco Revue.

Now on to watching Mr. Duprey and his friends spending your money on a good time…

We at Monaco Revue hadn’t planned on particpating much in the Grand Prix. With our lease expiring at an inopportune time, we had prepared ourselves to be scurrying around moving office equipment while everyone else was having fun. The only event we intended to cover was the Grand Prix and Fashion Unite show on the Friday before the race. However, a chance encounter at the show between our editor and her compatriot, former Trinidad government minister Carlos John, led to an invitation for Monaco Revue to take in the premier Formula 1 event the proper way — aboard a yacht with a view of the track.

“We couldn’t miss out on a Trini lime in Monaco,” editor Celia Sankar said. Translated from Trinidad slang, that means it was impossible to say no to joining fellow Trinidadians to hang out (ie “enjoy a lime”, a term that has noting to do with eating the fruit, by the way).

So, after a frenetic move, it was off to the Grand Prix to join a Trini posse that included industrialist Lawrence Duprey (head of the conglomerate CL Financial, which encompasses 65 companies in 28 countries, involved in everything from banking to making Trinidad’s famous Angostura Bitters); Duprey’s advisor, Carlos John; and Rampersad Motilal, CEO of Methanol Holdings Trinidad Limited (MHTL, a CL Financial company which is building the world’s largest methanol processing facility at an industrial estate in Trinidad). After meetings earlier in the week in Oman, where MHTL owns a plant, executives of the company stopped over in Monaco to celebrate MHTL’s tenth anniversary, which coincided with the prestigious F1 race.  “It was great; it was exciting,” Duprey said of his first Grand Prix, adding he plans to attend again. 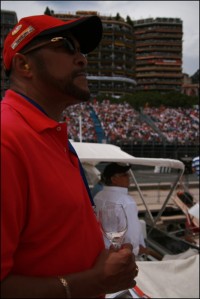