Nigel Farage to EU big shots: You are the assassins of nation states’ democracy

“Here we are on the edge of a financial and social disaster and in the room today we have the four men who are supposed to be responsible. And yet we have listened to the dullest most, technocratic speeches I’ve ever heard.

You are all in denial. By any objective measure the euro is a failure. And who exactly is responsible, who is in charge out of all you lot? The answer is none of you because none of you have been elected; none of you have any democratic legitimacy for the roles you currently hold within this crisis.

And into this vacuum, albeit reluctantly, has stepped Angela Merkel. And we are now living in a German-dominated Europe – something that the European project was actually supposed to stop. Something that those who went before us actually paid a heavy price in blood to prevent. I don’t want to live in a German-dominated Europe and nor do the citizens of Europe.

But you guys have played a role, because when Mr Papandreou got up and used the word ‘referendum’ – or Mr Rehn, you described it as ‘a breach of confidence’, and your friends here got together like a pack of hyenas, rounded on Papandreou, had him removed and replaced by a puppet Government. What an absolutely disgusting spectacle that was.

And not satisfied with that, you decided that Berlesconi had to go. So he was removed and replaced by Mr Monti, a former European Commissioner, a fellow architect of this Euro disaster and a man who wasn’t even a member of parliament.

It’s getting like an Agatha Christie novel, where we’re trying to work out who is the next person that’s going to be bumped off. The difference is, we know who the villains are. You should all be held accountable for what you’ve done. You should all be fired.

And I have to say, Mr Van Rompuy. 18 months ago when we first met, I was wrong about you. I said you would be the quiet assassin of nation states’ democracy, but not anymore, you are rather noisy about it aren’t you. You, an unelected man, went to Italy and said, ‘This is not the time for elections but the time for actions’. What in God’s name gives you the right to say that to the Italian people? 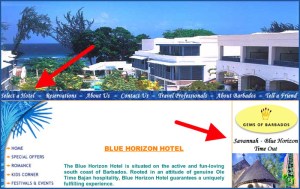 Website implies GEMS still operates a chain of hotels – only operates one.

We’re nearing the end of that failed adventure known as Hotels and Resorts and GEMS of Barbados hotels. The experiment in nationalizing the tourism accommodation industry now operates only one hotel – The Blue Horizon.

You’d never know that from their website though. True to form, it’s all show and no integrity as it deceives unknowing tourists into believing GEMS still operates The Savannah and Time Out.

The scandal of GEMS Hotels and Hotels and Resorts Inc. is a textbook lesson in how the political elites rape public funds and get away with it. Barbados tried to nationalize the hotel industry and lost hundreds of millions of dollars, perhaps over a billion dollars – who knows? They won’t tell us how much we taxpayers lost.

By using tax funds to support an unprofitable operation the Barbados government also kept out other brands and undermined private hotels large and small. The government even subsidized the GEMS hotels room rates to keep them lower than possible in the private sector.

That was decidedly hostile to outside and domestic tourism investors who soon got the message: “Don’t invest in Barbados where your main competition is the all-powerful government.”

As so many learned the hard way, it’s not a level playing field when the Barbados Tourism Authority pushes government hotels over privately-owned businesses.

Except the GEMS project failed just as everyone predicted and now the government is begging outside investors to renew our aging hotel inventory. The Government should have thought of that when they originally established a business climate that was poison to private investment in tourism accommodation.

Can you imagine if we’d have used that now-gone billion dollars to renew our infrastructure and professionalize and expand our police force? As a country we would now be cleaner, safer and more attractive as a tourism product. But no… we “invested” that money in buying run-down hotels, subsidizing years of losses and then selling the hotels at big losses.

… and then it was brilliant!

May 17, 2007: What Happened To The Money From Hotel and Resorts Ltd’s Assets Sale? How Much Went Into David Shorey’s Pocket?