How many abandoned developments can Barbados take?

2009: “The Merricks Beach Resort will become one of Barbados’s most luxurious, family-orientated 5 star resorts and will offer state-of-the-art accommodation and amenities including a world class spa. There is currently a shortage of this level of accommodation on the island.”

… from Harlequin Property: The Merricks, Barbados

2011: “Government had offered Harlequin concessions but to date they had not received them, so the development company had to shut the projects down until the concessions became available.”

Where is the bottom?

Word came yesterday that Harlequin Properties shut down construction at the Merricks Resort Development and the Allamanda Beach Hotel – “due to Government’s failure to provide concessions” according to an article in The Nation.

Harlequin says that the Barbados Government promised the company certain unnamed concessions at the start of the projects, but to date the government hasn’t delivered on its promises. That could be. Could it also have something to do with the alleged fraud at Harlequin’s Buccament Bay Resort? Who knows!

These are bad times and they are not getting better tomorrow. Whatever the promised concessions, if they involve revenue output from the Barbados Treasury the vault is empty and no amount of promising or wishing will make it not so. Did we promise roads, power, water and other infrastructure to the project? The money probably isn’t there. It really hasn’t been for decades unless we planned to borrow it and that free ride on our grandchildren is ending according to the IMF and any reality check.

We can’t pay our pensioners and government employees on time, chemists are waiting up to a year to be paid for government prescription plans and at least four buses I know of are sitting idle because the budget isn’t there to cover major engine and transmission work.

Other big projects are in trouble too as the private sector goes into hibernation during the financial chaos. The Four Seasons is nothing but a concrete wasteland, and in another year or so many of the half-done footings will be seriously damaged. There’s nothing more insidiously destructive to unfinished structures than salt-laced water running down exposed rebar and into the concrete for a couple of years. I’m sure that my friend and rebar engineer Grenville Phillips II would agree. 🙂

The other side of the story is that over the years Barbados has made it a habit to promise much to foreign investors to entice them to the island, but then fails to pay up. Off the top of my head I can think of a two prime examples, but there are many more…

British all-round good guy Anthony Martin loved dogs and he loved Barbados. He provided 1.8 million dollars to implement a nation-wide neutering programme to control stray dogs. He also funded an animal rescue centre. The agreement with the Barbados Government was that Barbados would pass laws to control stray dogs and so do its part.

Health Minister Donville Inniss was a no-show, the government failed to keep its commitment to Mr. Martin and that was the end of that. Barbados lost several million dollars in funding for a programme that improved the island. Once again it was proven that we’ll say anything to attract new investors and philanthropists – but we’d rather find a new sucker every year than keep our promises and retain our existing clientele. 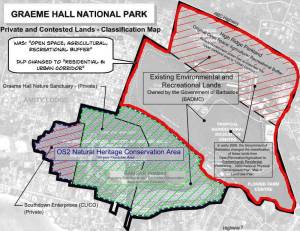 What’s to say? The government promised Canadian philanthropist Peter Allard that if he and several hundred Barbados citizens resurrected the Graeme Hall mangrove forest and established the world-class Graeme Hall Nature Sanctuary, Barbados would conserve and protect the surrounding Graeme Hall wetlands and watershed. That worked out for a time, with Barbados declaring some of the wetlands as RAMSAR protected, but then GREED got the best of the BLP and DLP politicians.

American foreign investor Mathew Kerins stupidly gave US$2 million dollars in “consulting fees” (cough, cough) and received a promise from then PM Owen Arthur that he could build a water park on the protected Graeme Hall watershed. Citizens went crazy over this and Owen was forced to cancel the deal. Owen Arthur lost the election and American foreign investor Kerins lost his US$2 million dollar , er, consulting fee.

Then the David Thompson DLP Government came into power and immediately Thompson decided that his old friend and CLICO boss Leroy Parris was okay to build on the protected Graeme Hall watershed. One of the first acts of the Thompson government was to remove the promised environmental protections on Graeme Hall and change the law to make it legal to fill and develop the wetlands.

The DLP canned the promised Graeme Hall National Park, approved development on protected areas and broke every promise and agreement made with the foreign philanthropist Allard. As a result, Allard was forced to close an outstanding tourist venue and laid off 100 workers.

The truth about Harlequin

What is the truth about the unfulfilled commitments the government made to Harlequin? The chances are that we citizens will never know. We never know anything except for this:

Whether Merricks is resurrected or sits as an abandoned blight on our coast, we’ll be paying for it for decades, while our political class quits the island and moves to Canada, the USA and Switzerland where their “consulting” companies and secret bank accounts are located.