We hear from a friend of a friend that the bank has shut down the Lighthouse Resort and won’t be re-opening it. It’s true, and that’s a shame because on TripAdvisor it looked like people were starting to appreciate the resort and the efforts of the staff to make visitors welcome and happy.

My friends, these are tough times. Everyone should do what they can to let visitors know we appreciate them choosing Barbados.

The Lighthouse Resort website is still up with no indication that they are closed, but this news is happening now.

Does anyone know how many hotels/beds we’ve lost in the last few years?

With the state of the hotel business in Barbados, I can’t see the wisdom in pouring our NIS pension money into the black hole known as the Four Seasons Project. 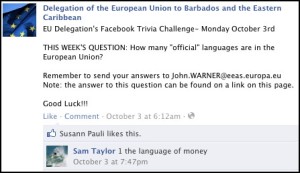 THIS WEEK’S QUESTION: How many “official” languages are in the European Union?

Subject: The European Union Delegation to Barbados and the Eastern Caribbean’s Facebook Competition and Campaign

This is to inform you that the European Union Delegation to Barbados and the Eastern Caribbean has launched a Facebook Giveaway Competition and Campaign. The objective of the competition is to increase the general knowledge and visibility of the European Union and the campaign is to facilitate our continued outreach to the general public. The prizes being awarded are special unique and authentic EU promotional items.

We would be grateful if you would participate in and inform the persons in your network (both personal and business) about the campaign. Just recently as part of the campaign we offered a special prize to the 100th person to ‘like’ our page and it is very likely that we will do so for the 200th person as well, so help us to spread the word!

Thanking you in advance for your continued support,

Tagged as Barbados, European Union, John A. Warner, The language of Money

When you drive a BMW SUV, you don’t give a damn about bus service for working folks!

“Recently some bus routes were downgraded to a 2 hour schedule. That is fine during off peak hours, but how about every 30 minutes during rush hours? That will certainly help the poor working class and those who depend on the service.

Just an idea for the smart people at scheduling.”

Invest in public transit that works

When the bus schedule changes were announced, the government SAID that service would be maintained more frequently “where needed”. That didn’t last long, did it? What the government doesn’t seem to get is that the service has to be there, frequent and RELIABLE before greater numbers of passengers will trust the service enough to rely upon it for work.

It is time to limit the number of 4 wheeled vehicles per household as Bermuda did years ago. It is time to stop building new roads and to start investing in public transit that works. Two hour bus service is a joke.

You want to empower ordinary working people? You want to give them more money in their pockets? Make personal autos a luxury and not a necessity as they are now.

You want to ease traffic congestion? Don’t build more roads for more cars. Instead, make it easy and affordable to own a scooter or small displacement motorcycle. Take the duty off motorcycles under 150cc and off electric motorcycles and bicycles.

We cannot keep going the way we’re going with the only “solution” being more personal autos on more and wider roads. This madness must stop!