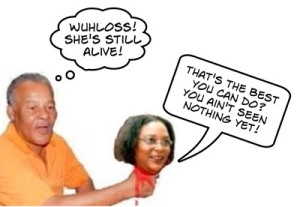 “Yes, Mia is justifiably outraged at the abuse of democracy and the disregard for the BLP Constitution – but her outrage is selective and selfish. Where was her outrage when her BLP government habitually ignored the rule of law?”

This October 18th marks the first year since power-hungry opportunists ousted Mia Mottley as Leader of the Opposition. Owen Arthur and his wild boys thought they had driven a political stake through the enemy’s heart, but then four months ago Mottley announced she would run for the position of BLP Chairman.

That sent Owen Arthur’s gang crazy. Not to mention that an independent poll found the vast majority of BLP members wanted Mia Mottley as leader over Arthur. In a one person / one vote contest Owen Arthur would be given his walking papers. What was Arthur to do?

For Arthur and his wild boys, the decision was simple: they would just illegally change the rules before the upcoming BLP Conference.

Any Bajan knows that when rules or the law stands in the way of those who have power, they do what they want anyway. That is part of the reality on this island. Rule of Law is a stranger in this country and that is the truth.

Mia Mottley is no stranger to ignoring, bending or changing the rules

In her current circumstances Mia is crying victim and warning about the abuse of democracy. She is correct, of course, but how soon she has forgotten that when she was the Attorney General with the full power of a majority government, the BLP changed the Barbados Constitution at the drop of a hat with zero public discussion. Mottley chooses not to remember that her government expropriated private lands with wild abandon and often never paid for those lands. That’s called theft – but not when you are in power.

And when some of those expropriated lands ended up in the hands of government ministers or their family members and friends – Mottley didn’t see anything wrong with that at the time.

Yes, Mia is justifiably outraged at the abuse of democracy and the disregard for the BLP Constitution – but her outrage is selective and selfish. Where was her outrage when her BLP government habitually ignored the rule of law?

On May 22rd this year, I announced my intention to contest the post of Chairman of the Barbados Labour Party. I made it clear that I was running on a platform to secure for every member of our Party the right that all Members of Parliament enjoy – to participate and vote at our Annual Conference, our highest decision-making body.

In 1951, the Right Excellent Sir Grantley Adams fought for and won the right for every adult Barbadian to vote. On this 60th anniversary of that momentous victory for Barbadian democracy it is only fitting that his Party, our Party, should enhance our own internal democracy by ensuring that every member has the right to vote. Indeed, this is consistent with section 11 of the BLP Constitution, which states as follows:-

“The purpose of this Constitution is to provide for procedures and practices which are democratic and efficient to the end that all Barbados Labour Party members may participate meaningfully and effectively in the deliberations and activities of the party.”

While the National Council has the power to propose Standing Orders to the Annual Conference and any Special Conference, it does not have the power to ratify them in advance of the Conference. It is appalling that it has acted in this manner. In so doing it has reduced the rights of women and young people in the Party by forcing them to now choose if they want to be members of a Branch or the Women’s League or Young Socialists respectively.

Simply put these changes will also reduce the number of young people and women who would be entitled to be a delegate and vote at Conference. To force a person to choose between the Branch and these bodies is both unconstitutional and unnecessary, since the Party has never allowed you to be a delegate for more than one body at the same time.

– (1) all Officers and members of the executive

– (2) all other eligible persons who have opted in writing to the General Secretary or Conference Secretary for their inclusion in the Membership List of the League of Young Socialists.

– (3) all persons who are included on the Registrar of members of the League of Young Socialists as verified by the Secretary thereof.”

– (1) all Officers and members of the executive

– (2) all other eligible persons who have opted in writing to the General Secretary or Conference Secretary for their inclusion in the Membership List of the Women’s League.

– (3) all persons who are included on the Registrar of members of the Women’s League as verified by the Secretary thereof.”

The sections that offend the Constitution have been highlighted for you.

This 60-day timeline for the submission of any recommendations for constitutional changes runs counter to the Constitution. Section 85 of our Constitution simply requires that any amendment to the Constitution may be made “by Resolution supported by two-thirds majority vote at the Annual Conference or Special Conference.” Only 44 days remained between the receipt of these Standing Orders by Branches and the date of the Annual Conference. According to these new Standing Orders no recommendations dealing with constitutional change (including any dealing with one man one vote) can be brought before the Conference this year.

Even more amasing, there has been no consultation with the Branches and Organs as to these new Standing Orders. We have received them as a done deal!

I have remained silent in the face of many other inappropriate and unfair actions in recent times, like the advertising of an In-coming Chairman before the date for nominations for Chairman has closed. Like the cutting of the number of delegates this year for St Thomas and St Michael East compared to what they had last year.

And, most offensive of all, by reading that a new Chairman has been declared before a single vote has been cast; thus, rendering the Annual Conference in the eyes of most Party members as a total charade. Whose interests are served by a journalist being so misled into believing that it is the number of branches nominating a candidate that determines victory rather than the number of delegates voting by secret ballot?

Where is our party going?

Throughout the history of modern political parties in Barbados, there have been internal difficulties. However, there is no example of a change in a party’s rules or Constitution targeting specific members by altering their rights without their knowledge or consent.

Indeed, this move to reduce the number of women and young people as delegates may be viewed by independent observers as a high-handed attempt to change the rules on the eve of internal party elections. You may well ask whether internal victory at all costs for certain interests is worth jeopardising the image and appeal of our great Party in the eyes of the wider electorate at this volatile and uncertain juncture of our nation’s history and within sight of a General Election.

The most powerful way I can register my strongest opposition to this undemocratic and unconstitutional cutting of members’ rights and tinkering with our constitution is to withdraw from the contest for the post of chairman. To remain would be to legitimise behaviour that is foreign to this party. In the interest of the greater good of the party and of the country it is time for this unseemly behaviour to stop.

This is not to suggest that I am not still interested in promoting progressive changes to our Constitution that will give every member the right to vote. However, I am mindful that we have, with the passage of these standing orders, crossed a dangerous line and now stand on the brink. We must rescind these standing orders as a matter of urgency. We must quell all other attempts to secure the domination by a few to the detriment of the majority. For we must ask ourselves, after the women and young people who will be next in the line of attack? Why is one-man one vote so threatening to the leadership a modern democratic Party?

I ask that you reflect on these questions. Use the opportunity of branch meetings over the next few weeks and of the Annual Conference on the 29th and 30th October at Grantley Adams School to come out and demand respect for and a retention of the democratic values and time honoured traditions of integrity and fair play that have always guided this great Party.

For if we can do so and regain our focus on the issues most important to the Barbadian people, we will stand fully prepared to answer the call to restore confidence to our beloved Nation and to ensure that all Barbadians can once again return to prosperity.

I thank you for your attention and trust that you will think deeply about these matters.