Slaughter continues: Road Fatalities up 61% over 2010

There are more calls today for the government to pass breathalyzer legislation. (See Nation: Call for breath test)

We’d like to remind Bajans that for eight years Transport Minister Boyce and his predecessors promised modern anti-drunk driving laws, breathalyzers and strict enforcement of traffic offences that kill our family members, friends and neighbours.

None of those laws or changes happened. In 2010, Transport Minister Boyce again promised, saying we’d see breathalyzer laws in 2011. We said at that time that we didn’t believe him. We were right.

Government response to more fatalities: Transport Minister Boyce makes same speech he made a year ago!

“One of the things we have been talking about recently is the launch of our National Council for Road Safety which is a new umbrella organisation for all the road safety organisations in Barbados and being represented at the highest level of Government. Our plan is that the Prime Minister [Freundel Stuart] will chair this council or delegate to one of his ministers to do so.

“This is our response to the United Nations Declaration of Road Safety that will start in 2011, and goes until 2020…”

Minister Boyce also disclosed that Cabinet recently approved the establishment of the Barbados National Road Safety Council, which will be chaired by the Prime Minister and with the Minister of Transport and Works as deputy chairman.

Meanwhile, Boyce said Barbados was vigorously pursuing objectives outlined under the United Nations General Assembly’s declaration that the years 2011 to 2020 was “The Decade for Road Safety”.

Just about a year ago Barbados Free Press reported that Barbados road deaths happen at a 240% higher rate than the UK. You can forget that statistic because so far this year we’ve had 18 road deaths compared with 11 in the same period in 2010. That’s up 61% from last year’s already horrendous death rate.

Over a year ago we wrote Barbados cell phone driving ban coming? Why we don’t believe Minister of Transport John Boyce. We were correct: it was all talk and no action.

The DLP government and the BLP before it long promised pedestrian overpasses in some of the killing zones. The overpasses never came and pedestrians are still dying.

None of that happened either.

Have you noticed what happens when we have a particularly messy road death, mass injuries or a series of fatalities in a few weeks? Transportation Minister John Boyce gives a press conference, expresses sadness at the loss of life, sympathy for victims and their families – and then he makes a “We’re doing something about this” speech.

Yup. Happens every time. The latest was just a few weeks ago when pedestrian Eusteuce Padmore was killed instantly. In response, Minister Boyce “REVEALED”…

– The Cabinet “recently approved” the establishment of the Barbados National Road Safety Council.
– The council “will be chaired” by the Prime Minister. (In the future, when it really exists.)
– A “Steering Committee was presently working on the council’s launch…”

Oh yes… Boyce said that Barbados “was vigorously pursuing objectives outlined under the United Nations General Assembly’s declaration that the years 2011 to 2020 was ‘The Decade for Road Safety’.”

Fabulous. “Steering Committee”, “recently approved”, “will be chaired”. OH!!! Impressive! That sounds like ACTION, doesn’t it? 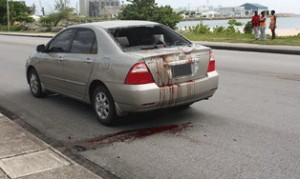 Trouble is, Boyce said the same thing in December of last year. Also last year in August – again in response to a very gruesome pedestrian death (photo above), Boyce promised a pedestrian overpass at Spring Garden Highway, and pedestrian paths near the CBC.

We still don’t believe that Minister of Transport John Boyce or his government consider road safety a priority. If they did, the new laws would have been in place two or three years ago. Hey… we’re coming up on four years in government for the DLP.

All talk, no action.