The tourist numbers are tanking – they have been tanking for a long time. Global financial problems are taking a toll, it’s true, but our numbers are especially bad and worse than most in the Caribbean.

Many folks think that a little more advertising will take care of things. That might get us a few more tourists, but that won’t cure the foundational problems that we have with our tourism product.

This article from our own Nevermind Kurt tells it fuh truth! We drove the old tourism economy taxi right into the ground without changing the oil or performing normal maintenance. We just made money with that old taxi until it could go no longer and we didn’t save for a new one. So here we are trying to make our living driving an old rust bucket of a taxi while everyone around us has a shiny new taxi. No contest where the customer will take their money!

“We cannot continue with the Barbados Tourism Authority’s current philosophy of advertising instead of ensuring product quality. We have to change the road we’re on, or there will be nothing left for our children.” …BFP staffer Nevermind Kurt 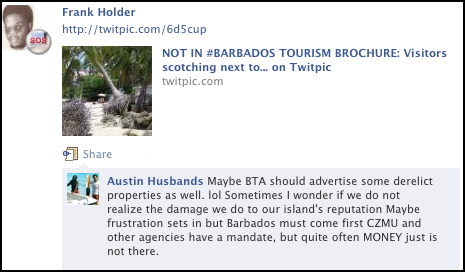 “Maybe BTA should advertise some derelict properties as well. LOL Sometimes I wonder if we do not realize the damage we do to our island’s reputation Maybe frustration sets in but Barbados must come first CZMU and other agencies have a mandate, but quite often MONEY just is not there. ”

BTA Deputy Director Austin Husbands chides Mullins Bay Blog for posting an expose of destroyed beaches and empty hotels: You probably will not see this in the glossy Barbados tourism literature

Memo to the BTA: Deceiving tourists doesn’t help Barbados in the long run

by Nevermind Kurt (with Marcus)

When I first read Austin Husbands’ astonishing comment on the St. Peter, Barbados Facebook group, I became angry and started to write a slashing rant aimed squarely at the BTA’s Deputy Director. Then I sat back and thought about the tremendous pressures that our tourism industry and every Bajan is facing at this moment. I also thought that Mr. Husbands believes that he and our tourism industry are trapped by circumstance into carrying on with more of the same: concentrating on promotion rather than on product quality. (ie: “We need the tourist money NOW… no time for foundational changes. Advertise MORE!”)

I’m no longer angry at Mr. Husbands. I think he’s wrong in his approach, but I understand where he’s coming from. I understand his generation’s current desperation and exasperation that while the BTA spends tens of millions of dollars advertising and promoting a Perfect Image of Barbados, concerned Bajans and disgruntled visitors are posting photos of the truth online. Has Mr. Husbands ever read TripAdvisor or Carnival Cruise Lines forums? He should… every day.

“We ordinary Bajans and many of our Barbados regulars have a fundamental disagreement with the Mr. Husbands, the BTA and our political leadership about where our tourism industry is taking our country.”

Ordinary Bajans believe that there is no real plan, that it’s all happening willy nilly and that the long term good of Barbados is being shunted aside for short term profits and personal gain at the expense of our children’s future. Irreparable damage is being done – socially and environmentally – yet the vast majority of our tourism “leaders” can only see the next financial quarter. I understand that, but I’m also saying it’s time to get off the road we’re on. END_OF_DOCUMENT_TOKEN_TO_BE_REPLACED