Rihanna’s advice to parents: “Make sure your children don’t turn out like US.” 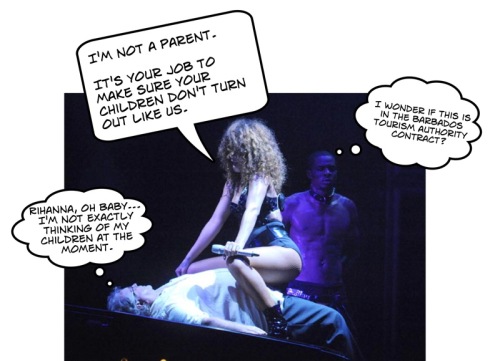 By all accounts Rihanna’s concert on August 5th was a big success in many ways. Her fans had a wonderful evening even if some of the things she did caused more than a few jaws to drop. Everybody thought she’d turn her “raunchy” setting down to “low” for the homecoming concert but about the only thing she didn’t simulate on stage was oral sex. Then again, every artiste has to leave some room for development, so maybe we’ll see the oral sex on stage next time.

What made Rihanna’s concert a “success” ?

Everyone says that RiRi’s concert was a success for Barbados so it must be so. I guess. We’ll all have to guess because it is a big secret who made the money or how much it cost the taxpapers. Rihanna doesn’t usually have to have her concerts subsidized, but it would still be nice for we taxpayers to know how much it cost us.

I’m still having trouble with the whole Rihanna – Barbados Tourism Authority deal. Sure, Rihanna’s concert raised the island’s profile for one news cycle, but I’m not convinced that translates into a return on investment in the form of increased tourism and investment.

I’m not sure whether Rihanna is capable of reaching the right audience for Barbados: high end travelers who will see her grinding away on stage and immediately think “Honey, let’s head for Barbados next vacation.”

If it’s all about making publicity and not reaching target markets, let’s really go to town and get Prime Minister Freundel Stuart up on stage to simulate sex with Rihanna. NOW THAT would get some worldwide press coverage. Matter a fact, get Owen Arthur and Mia and….

OH WAIT!!!!   OH MY!  I just had an idea for a couple of photoshop cartoons. OHHHHH This will be awesome! Give me a week or two to round up the talent and get in the mood.

Barbados Free Press isn’t the only publication wondering about Rihanna’s performances. Here’s an example from the Hollywood Reporter…

Rihanna needs to be careful and more mindful of her behavior. But, as she articulated to fans after one parents group recently claimed that her “Man Down” video glamorized murder, she’s not in the business of making appeasing the polyanna demographic. She tweeted, “I’m a 23 year old rockstar with NO KIDS! What’s up with everybody wantin me to be a parent? I’m just a girl, I can only be your/our voice! We have the freedom to make art, LET US! Its your job to make sure they don’t turn out like US. U can’t hide kids from society or they’ll never learn how to adapt!”

So much for hoping she changes. At the very least, we hope she passes on future on-stage inter-generational simulated sex.

From the Hollywood Life story Rihanna, Tone It Down A Notch! Simulating Sex On-Stage With With A 60-Year-Old Stranger? Ick!

Rihanna is 23 years old, a multi-millionaire with servants that come running. She’s pursued, feted and surrounded by important rich people feeding her whatever they think she wants to hear. She’s a valuable commodity and everybody, including the Barbados Tourism Authority and the Government of Barbados, wants a piece of the action. To be seen with Rihanna is to be publicly affirmed that you’re a somebody. Or a some-Country.

Money is what it’s all about – Not what Barbados is all about or should be or could be. Or was.

Our political and tourism leadership is so desperate and bankrupt of ideas that they can only latch onto Today’s Big Thing no matter what it is and with no regard for our heritage and how we want our country to be. Yesterday we embraced medical tourism. Today it’s Rihanna. Tomorrow it will be gambling. Maybe legalized prostitution after that ’cause we’re running out of things to sell ’bout hey.

I’m looking forward to the next Rihanna concert. The nature of relying upon publicity rather than product quality is that the publicity will have to be ever bigger, raunchier and more shocking to garner attention. Maybe Prime Minister Stuart will take the stage!

What a powerful video. A big thanks to our long time reader UB. I don’t know where you come up with these gems, but we really appreciate them.