Egyptian Nazi Party re-establishing. How is Arab Spring working out for freedom and human rights?

Thousands call for beating of women drivers in Saudi Arabia

The celebration by some in the West over the “Arab Spring” uprisings is quieting as the truth continues to reveal itself in disturbing news stories every day. Students of history are unsurprised to find the Muslim Brotherhood and other Islamo-fascists taking positions of power in the Middle East and issuing policy statements and warnings.

Unfortunately, the Muslim fascists now also have moral, monetary and military support from the West. As US President Obama said about the Middle East on May 19, 2011, “It will be the policy of the US to promote reform, and to support transitions to democracy…”

The West is about to discover that it should be more careful about what it wishes for.

Most in the West have forgotten (if they ever knew to begin with) that any “democracy” only reflects the values and desires of the population that votes. If the population believes that Jews, Christians, women and gays are lesser people and should not have the rights accorded to Muslims and Muslim men, that will be the end result of electing their “democratic government”.

And then there is the “One man, one vote, but only one time” syndrome where a population elects a totalitarian government that cannot easily be removed. Most people forget that the Nazis and Hitler were democratically elected to power in Germany on a platform of German solidarity, racial superiority and a promise to take care of “the Jewish problem”. No doubt President Obama, Prime Minister Cameron and the other world leaders currently applauding the Arab Spring would have supported “democracy” in the 1932 German elections when the Nazis finally won their majority. Democracy… isn’t it grand? 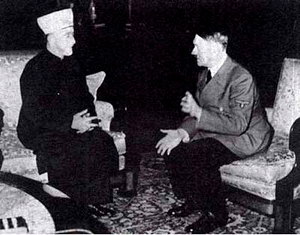 “Arabs, rise as one man and fight for your sacred rights. Kill the Jews wherever you find them. This pleases God, history, and religion. This saves your honor. God is with you.”

Mohammad Amin al-Husayni, Leader of the Muslim world and Mufti of Jerusalem on Radio Berlin, March 1, 1944. (Shown having a friendly little chat with Adolf Hitler above)

The Egyptian Nazi Party, held in check under now deposed leader Mubarak, is flourishing since Arab Spring. Blindly fanatical supporters of democracy should rejoice as the Egyptian Nazis return to the political process. Just as the Muslim world embraced the Nazis during the 1930’s and 1940’s, modern Egyptians will find that Nazi ideology is a good partner with the Koran and Islam. After all, the Holy Koran as revealed to the Prophet Mohammed (PBUH) and the hadiths say that the peace of Islam will never happen until the Jews are dealt with:

The Hour [Resurrection] will not take place until the Muslims fight the Jews and the Muslims kill them, and the rock and the tree will say: “Oh, Muslim, servant of Allah, there is a Jew behind me, kill him!”

That’s why in the years up to and during World War II, the leader of the Muslim world and Mufti of Jerusalem, Mohammad Amin al-Husayni, embraced Hitler and the Nazis. Tens of thousands of Muslims served with Waffen-SS military units, and the Nazis promised Jerusalem and the murder of all Jews in the Middle East upon the Nazi victory. The Nazis even set up an SS school for Mullahs in Dresden.

You might not have been taught about this in your school history class, but a few moments on the internet will open your eyes. Start with the transcripts from the Nuremberg trials. Contemporary news media has largely purged the inconvenient history of Muslim and Nazi solidarity from public knowledge, but thank goodness we can access historical archives on the internet.

“To the Grand Mufti: The National Socialist movement of Greater Germany has, since its inception, inscribed upon its flag the fight against the world Jewry. It has therefore followed with particular sympathy the struggle of freedom-loving Arabs, especially in Palestine, against Jewish interlopers. In the recognition of this enemy and of the common struggle against it lies the firm foundation of the natural alliance that exists between the National Socialist Greater Germany and the freedom-loving Muslims of the whole world. In this spirit I am sending you on the anniversary of the infamous Balfour declaration my hearty greetings and wishes for the successful pursuit of your struggle until the final victory.”

Welcome to democracy in the Middle East. It will be empowering and uplifting – unless you are a woman, Jewish, Christian, atheist, gay, enjoy dancing, reading or believe in human rights and individual freedoms.

Daily Mail: ‘Whip them if they take the wheel’: Saudi men launch Facebook campaign in response to women planning protest against driving ban

4 responses to “Egyptian Nazi Party re-establishing. How is Arab Spring working out for freedom and human rights?”