Barbados Prime Minister Freundel Stuart just returned from the third Nobel Laureate Symposium on Global Sustainability where he rubbed shoulders with Nobel prize winners and famous and not so famous environmentalists and world leaders.

Not only did PM Stuart attend the conference in Stockholm, Sweden – he played an active role with the UN High-level Panel on Global Sustainability and conducted an open discussion with the crowd. Former US President Bill Clinton listened to our Prime Minister quote Martin Luther King: “There is no deficit in human resources, the deficit is in human will.”

National Geographic quoted Freundel Stuart like he really meant what he said and would back it up with action.

We at Barbados Free Press say…

“Our plea to National Geographic: Come to Barbados and see the destruction for yourself. Examine the reality, then write. Don’t empower those who say fine words but are really selling out our natural environment for money.”

While Freundel Stuart mouthed his fine words, back home his Democratic Labour Party government is conducting a strategic campaign to destroy the last remaining mangrove forest on the island so it can be commercially developed. Money has always trumped the natural environment in Barbados and Stuart’s DLP is continuing the practice.

The only way our successive governments have maintained our so-called first world country status is to sell off our natural heritage, wall off the coasts and pave over the island bit by bit to keep up the interest payments on all those international loans.

Unfortunately, nobody at National Geographic had the knowledge and the courage to call our Prime Minister and his government on their environmental hypocrisy.

One of the first legislative moves by the DLP upon assuming power in January 2008 was to remove the protected status of the Graeme Hall watershed to allow commercial development of the area surrounding the Graeme Hall RAMSAR wetlands and mangrove forest. The DLP government continued Owen Arthur’s policy of failing to maintain and repair the sluice gate that is supposed to allow the mangrove forest to naturally “breathe” and be refreshed by the sea. The government also dumps raw sewage into wetlands.

And that’s just the mangrove forest on the south coast. Don’t get me started about the West Coast where we borrowed big time to build a sewage treatment facility but never built it. Our governments spent the millions on something else and consequently Barbados continues to let the sewage go into the ground and work its way to the sea. 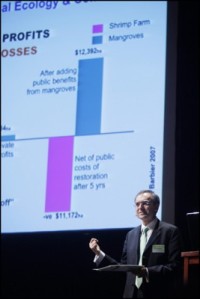 Pavan Sukhdev and the economic benefits of Mangroves

The moment of sublime irony for Prime Minister Stuart must have happened when his fellow presenter Pavan Sukhdev of Yale University gave a particularly valuable banker’s view of the economic values in preserving the natural environment. Mr. Sukhdey told of how saving an endangered white stork population yielded new tourism dollars and how there were hidden costs embedded in destruction of mangrove forests.

And Frudel Stuart sat there nodding and agreeing with Mr. Sukhdev – all the while aware that he and his DLP government are actively working to destroy the last remaining mangrove forest in Barbados.

Our plea to National Geographic: Come to Barbados and see the destruction for yourself. Examine the reality, then write. Don’t empower those who say fine words but are really selling out our natural environment for money.

Prime Minister Stuart and his DLP government couldn’t even be bothered to pass an Environmental Protection Act. Anything goes on this island. Need to dump chemicals or asbestos? Come to Barbados where it’s not illegal because no government made a law against it. The political elites like PM Stuart wouldn’t want to upset their corporate donors.

National Geographic and VP John Francis: come and see for yourselves.

BFP: Barbados don’t need no stinkin’ Environmental Legislation because we got another loan!