BREAKING: Doubts over REDjet Approvals in Trinidad and Tobago

This story is just breaking on the internet and there will be more to come when it all hits the fan in Bridgetown in the morning. The permits issue will probably resolve itself and calm down tomorrow – but right now it sure is interesting!

Here’s a start and our readers or others at BFP can pick up on the story as it develops. Comments are open!

“You know something, regrettably, I don’t have all the details of REDjet’s entry into Trinidad and Tobago. … I keep trying to know how it happened and why and so on. Be that as it may I want to believe that it is healthy competition and if REDjet coming to Trinidad and Tobago means that (Caribbean Airlines) will buck up … or lower its fares for the general public then so be it, because nothing is wrong with competition,” said (Transport Minister) Warner during the post-Cabinet press briefing at the Diplomatic Centre, St Ann’s.

“I would have liked to know how the airline got the permission, from whom and when and I’m not quite sure I can answer you those questions,” Warner continued, adding that he had no documents at his ministry’s office with respect to REDjet’s operations.

Director general of the Civil Aviation Authority Ramesh Lutchmedial told the Express yesterday that no approval had been granted for REDjet to start operating in Trinidad and Tobago.

REDjet, the Caribbean’s first low-fare airline, was launched at The Carlton Savannah hotel, Port of Spain on Wednesday. 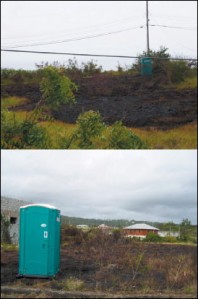 Who ordered this toilet?

Wednesday night at around 11:30pm fire was set to a plot of land in Travelers Av., Fortescue, St.Philip. If it wasn’t for the neighbor who immediately alerted the fire department and their prompt response, the fire could have raged out of control and threatened several houses in the area.

It is not difficult to guess who lit the fire. In the morning a brand new portable toilet was delivered to the same site!

Another display of irresponsible madness and a total lack of consideration for the safety and health of others.