Argyle International Airport in St. Vincent within a year? Not going to happen! 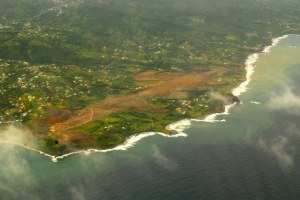 Mention was made in your article American Eagle pullout from Puerto Rico hits Barbados hard, of the completion of Argyle International Airport in St. Vincent within a year. This is impossible… construction drags on in fits and starts. Here are photos taken two days ago, April 9, 2011.

I am not an expert by any means, but does it matter that it is aligned almost due north with the Trade Winds coming in crosswind from the side? The pilots and airport followers may like to comment.

To build an international airport in this economic climate is no joke! But I suppose it helped to win a recent election.

Thanks to another reader, we see this on the website of the airport development company…

Constructing the Argyle International Airport: Where are we?

Due to a delay in the start of construction work on the Argyle International Airport Passenger Terminal Building the completion date for the airport has been moved from mid 2012 to mid 2013 when the airport is now expected to be completed and operationalize.

Construction work on the terminal building was scheduled to commence in August of 2010. A tender for its construction was issued on 7th June 2010, but for a variety of reasons, no tender was received by the appointed time for submission of tender.

Contractual negotiations with OECC are now finalized and work is due to begin in April 2011.

The IADC will, at some stage this year, enter into contracts with other private firms for the construction of the Fire and Rescue Station, Cargo Terminal Building and Control Tower.  However, IADC has decided to do the site works, internal roads, drains and parking areas, using resources already at its disposal.

55 responses to “Argyle International Airport in St. Vincent within a year? Not going to happen!”