Barbados has no rules about elections funding. Owen Arthur pretends Mia Mottley did something wrong. 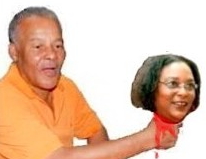 “I don’t want to appear as though I am fighting with Miss Mottley,”

An internal Barbados Labour Party report by former party treasurer Tyrone Barker was leaked to The Nation newspaper, probably by Owen Arthur or one his supporters – but almost certainly with Arthur’s knowledge and approval. It seems that in January 2008 when Mia Mottley took over the party, there were half a million dollars leftover in a “special trust fund” that had been established for the election campaign.

As leader of the party, Mia Mottley used those funds as she saw fit which was to pay for her office and staff for almost three years and to use some of the money for political advertising. By the time that Owen Arthur wanted his party back and pulled the coup in October, 2010, the half a million dollars was down to $143,000. It looks like fundraising for the BLP didn’t go so well in bad economic times and after they got their butts handed to them in the election. I guess the BLP forgot how hard it is to get people to write cheques to the party when it’s not the government anymore and can’t hand out the biscuits like it used to!

So as leader, Mia Mottley used the election funds for salaries because it had to be done.

And like an old dog smelling a little blood coming from a younger opponent, Arthur thought he’d use the occasion to kick Mottley again just to make sure she doesn’t get any ideas of who’s the top dog ’bout this island. He’s in the paper telling the public that he wouldn’t criticize Mottley (No, of course not! LOL!) but that under his leadership of the BLP the fund had been managed by the trustees and always kept separate from the ordinary accounts of the party “for good reasons”.

No way that’s a criticism of Mottley. (Guffaw! Robert has beer running up he nose now!)

Owen Arthur is making like Mia Mottley misused the funds, but it’s not so. Every penny is accounted for, and what were she and the party to do?

Now we get to the best part.

In chiding Mia over how she spent party funds, Owen Arthur would like the public to forget that when he was Prime Minister, someone gave a $75,000 political donation to the party that went directly into Arthur’s PERSONAL BANK ACCOUNT. Those funds never made it to the party coffers until then Opposition Leader David Thompson waved the cheque around and told the story. Then Arthur said “oops” and that was the end of that.

Nothing ever came of Arthur outright misappropriating party funds because this is Barbados and we have no rules about election funding – so no rules were broken.

Our politicians take funds from Cuba, China, USA, Britain, Canada and anyplace else they can. When in power for 14 years, Owen Arthur, Mia Mottley and the BLP made sure there were no rules for politicians. They like it that way.

Here’s an article sent to us by “Mr. Anonymous”…

Owen Arthur’s hubris: There can be no Barbados without me!

About ten days after running the most disastrous campaign ever ran by any leader of the BLP in St. John, a bitter Owen Arthur who was rejected even by BLP supporter, is seeking to do damage control but succeeds only in destroying Grantley Adams’s party even further. In short, Owen Arthur is a national embarrassment and disgrace, who is obsessed with his public approval rating!  Time was when BLP members and supporters trusted Owen Arthur and his judgment but it is clear that a lot has changed since 2008 and he only has himself to blame.

No one expected that he was capable of putting so many thousands intended as campaign contribution, into his personal bank account unknown to anyone in the BLP. There are also BLP people who stop you on the road daily to tell you that the taxpayers’ money was not Owen Arthur’s’ to help-out a friend,’ even if that friend was in a tight spot.

There are two things that are not in dispute.  One is that under Owen Arthur, the BLP is fast developing an image as a party, which is anti-women.  If Owen Arthur is giving you, that seems alright but if as a woman you can make it on your own, then you immediately become a target for his unprovoked and caustic attack.  Mia Mottley, Andrea Power and Mara Thompson are three of many examples.

The second thing which is not in dispute is that Owen Arthur is a tired, lonely and bitter old man who desperately wants power.  Because of his serious love of himself, he is cranky and terrified by the notion that there can be a Barbados or even a Barbados Labour Party, without him.  This is a man who made it clear to Barbadians that his sole aim in politics is to ensure that the DLP never becomes the government again.  His intention is to orchestrate a rescue mission of himself as having been called to save Barbados.

The very man who is said to have gone to Parliament less than six times between 2008 and October 2010 is now being reported in the Sunday Sun of January 30th 2011 as having said: “I don’t want to appear as though I am fighting with Miss Mottley…I am trying desperately to hold the Barbados Labour Party together.” Mind you, Owen Arthur is talking about a party that has been in existence for over 72 years and had giants within its ranks like Grantley Adams, Tom Adams, Henry Forde, Cheltenham, Louis Tull, Bree St. John, Mia Mottley and Billie Miller. Wasn’t the BLP united before Arthur and his ‘gang of five’ ousted Mia Mottley in October 2010, which started the fast free fall to mistrust and confusion?

What does it mean when someone says: “those who are part of the party’s platform should step in sync with the party?” Should Mia Mottley have joined Owen Arthur and those on the platform in the St. John By-election who told the country that Mara Thompson was “unacceptable,” and that she was an “affront?” Should Mia Mottley now join with Arthur and others and criticise the DLP weekly for the sake of criticism? That is what this issue in the Sunday Sun is about: a seriously wounded Owen Arthur now seeking to do damage control!  It shows the level of desperation on his part to be relevant and to grab headlines.

It is a desperate attempt by an embarrassed and seriously wounded Owen Arthur to create a distraction tactic to get the spotlight off him.  After promising BLP members that in order to win, they only had to make him leader, Owen Arthur cannot deal with the humiliating rejection he got in St. John, even at the hands of BLP supporters.  During the By-election, it was also quite noticeable that Mia Mottley distanced herself from the unproved attack made on Mara Thompson by Owen Arthur and other persons, who like his style of politics and as expected – spurred him on in his wrong doing.

In contrast, it was not surprising that Barbadians on both sides of the political divide as well as those in the middle – felt that Mia Mottley’s two speeches were dignified, mature and responsible, whereas two regional Prime Ministers expressed shock and total disgust at Owen Arthur’s un-called-for attack on Mara Thompson.  Owen Arthur keeps finding himself on the wrong side of public opinion.  But what could you say about a man who called a Media Conference on the very morning that Prime Minister Thompson died!

It is not often that the region sees in Owen Arthur, a man who has fallen so far from grace in a mere three years.  Now realising that he continues to be an embarrassment to the BLP and a serious turn-off to the electorate, despite saying that there is a clamour for him, Owen Arthur has started on a renewed mission to seek to pull down and destroy Mia Mottley and ever other woman in Barbados he hates.

His is the behaviour one usually associates with a drunkard and a bully who engages in the most reckless acts and when spoken to, go home and take out his frustration on his family.  This is yet another in a never-ending-series of unprovoked attacks on women, especially Mara Thompson and Mia Mottley.

First he told Barbadians to find her “unacceptable!”  Then he tried to make her look childish by stating at the Party’s Conference: “Mia the BLP needs you.”  After calling for healing, he sent a letter to the Clerk of Parliament asking for an investigation into his baseless allegation that files were missing from the Opposition’s Office. And now, yet another attempt to suggest wrong doings, as regards funds left in an account.

Is the information, which was leaked to the Nation Newspaper, suppose to downplay the fact that Owen Arthur is known to have put thousands intended as campaign contributions – into his personal bank account – unknown to any one in his party?
Why an investigation into the account being mentioned in the Sunday Sun, where (it would appear that) funds were used to advance the work of the party but not an investigation into the charge made by the Parliamentary Representative for St. James North, Rawle Eastman – as regards why someone paid the party $560 for 56 delegates he (Rawle) knew nothing about?  Why not an investigation into why the Women’s League (headed by the very woman who is now Arthur’s Personal Assistant) was able to cherry-pick 210 delegates, when no meeting was held for that purpose?  Why no investigation into why under-aged persons, as well as person who are said not be members of the BLP – and never made any application to join – were down as delegates to votes for George Payne?

The issue is Owen Arthur’s insecurity and the speedy rate at which he is turning off even die-hard BLP members. Owen Arthur does not like what he sees when he looks in the mirror.  He is a lonely and empty man who is searching for peace and desperately needs help.  Because he is bitter, he feels that no one else should be happy.  Despite presiding over a dysfunctional family he has manufactured in the last four years, he remains empty and bitter.  The only thing that can cheer him up is he becoming Prime Minister again.

Mia Mottley is right!  Ignore Owen Arthur, remain silent and do not get into a brawl or spitting contest with “yesterday’s man.”

But: Exactly how did Owen Arthur reach this stage of thinking that there can be no Barbados without him?

20 responses to “Barbados has no rules about elections funding. Owen Arthur pretends Mia Mottley did something wrong.”