The slogan of CL Financial’s CMMB was “Intelligent Investing” but the reality is shown by their return on assets for the five years before their collapse:

Yours truly, Robert, managed to average an annual 7.32% return on my personal investments over the same period and I know virtually nothing about investing.

There are big, big questions about the CL Financial, CLICO debacle: most of them unlikely to be answered by those with dirty hands. Our friend Afra Raymond kicks off the new year by continuing to ask questions in his usual devastating manner which I liken to a stiletto in the heart of the CL Financial and CLICO “executives” and their enablers: the politicians and PricewaterhouseCoopers auditors…

Given the very low profits earned during CMMB’s operations, there are two inescapable questions arising – “What is the real reason for the CL Financial group to hold onto this company?” and “What was in it for them?”

“Which devour widows’ houses, and for a shew make long prayers: the same shall receive greater damnation.”

How many lives did PricewaterhouseCoopers ruin because they did not do their duty? END_OF_DOCUMENT_TOKEN_TO_BE_REPLACED 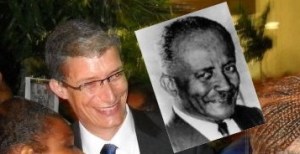 Rawdi Adams says we haven’t had a real debate yet

Rawdon ‘Rawdi’ Adams is the grandson of nation-builder Grantley Adams (With Rawdi in the above photo… look at the eyes! the chin, the nose, the smile!) and the son of our second Prime Minister Tom Adams. Rawdi has much to say about Barbados and Bajan politics these days.

Will he be returning home anytime soon? In light of the disastrous split in the current BLP leadership that question has been coming up lately at a few rum shops. Never say never, you know!

Rawdi published an opinion piece at The Barbados Advocate and we’re going to repeat it in full here. You really should go to the Advocate to read it, but given that paper’s history of erasing the truth and their archives we’re going to leave the whole article up here for the record.

But please, visit the Barbados Advocate to read the piece and then leave your comment here if you desire.

Thoughts on the BL&P offer

In an era when some nations block foreign takeovers of even yogurt makers on the grounds that they are “strategic assets” (as France did when Pepsi wooed Danone in 2005) it is surprising to see the truly strategic BL&P up for sale to a foreign buyer with so little reaction from the Barbados Government. It does, after all, control nearly one quarter of the company’s equity via the National Insurance Scheme (NIS).

This is not an ideological position (as was the case with the strategic yogurt). Nor is it a chauvinistic one – BL&P is a utility which has already spent long periods under Canadian control. Rather, it is about voluntarily relinquishing, or potentially relinquishing in the absence of safeguards, powers to optimally balance public good against private, monopolistic enterprise in the furtherance of national development. END_OF_DOCUMENT_TOKEN_TO_BE_REPLACED

Barbados Police Commissioner reveals truth: There is no new plan.

Dottin earlier said he didn’t want to reveal too much. Now we know why.

In the wake of two separate shooting murders last weekend, The Nation Newspaper called up Commissioner Dottin on January 2nd and politely asked what the Royal Barbados Police Force was doing to address escalating serious crime. As we reported on January 3rd, Dottin mouthed some buzz words and told the reporters he “didn’t want to reveal too much” and that “the full matter would be addressed at a Press Conference this week with media personnel.”

The Commissioner held his press conference on Thursday, January 6th, and unless every journalist there is conspiring to withhold details of the new police plan from the public, the simple truth is… there is no new plan, no new response and nothing really to report.

Oh… our Commissioner of Police did say that thieves target laptops, gold and diamonds. Imagine that. Thanks, Commissioner! END_OF_DOCUMENT_TOKEN_TO_BE_REPLACED