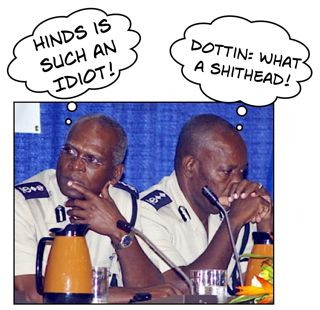 “…so emboldened, the deputy sought to make a complaint against the top cop – no one is sure if this is related to the connected matter or if there are other details in addition to the open fracas? Yet when the review of 2010 with Crime In Barbados unfolded today at Police Headquarters at Roebuck Street – Bertie Hinds was conspicuously absent!

This led Peter Thorne from CBC to query if there was still disagreement between the two officers and Commissioner Dottin declined to respond, then almost immediately afterwards, Mike King of the Nation asked if the top cop has any plans of announcing a retirement in the near future and again Dottin refused to answer! Usually such declinations are left to die on the vine, but in the interests of all Barbados it needs to be made clear…”