Spark of the Day! African drums, kilts and bagpipes… 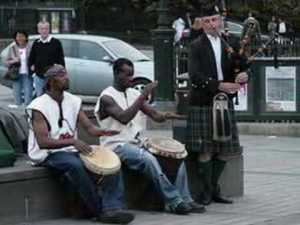 L’Acoustica plays and the world gets smaller

After seeing the above photo inserted into a YouTube video from Scotland, I tried to discover more about the musicians. I think I’ve discovered who they are, but I’ve been unable to hear their music anywhere.

L’Acoustica is a new Scottish sonic folk/soul trio formed by Bryan Tolland, Noel Bridgeman and Carl Bridgeman. Bryan is the white guy and twin brothers Noel and Carl hail from Dominica – or at least their family does. The group’s website is fuzzy on that.

They played live on BBC Radio Scotland on the Janice Forsyth broadcast at the Royal Highland Show, but sadly BBC didn’t post a recording, only some photos. There is something wildly intriguing about this fusion of music and cultures. The photo showing one of the Bridgeman brothers dressed in a kilt and riding a stand-up bass like Buddy Holly and the Crickets playing the Apollo is pure adrenaline for mixies* like yours truly. And part of the high is knowing that it drives the racial haters and segregationists (of all colours) insane.

*Mixies = People who are mixed race, mixed culture or in mixed marriages. 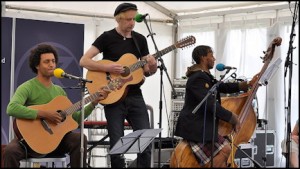 Comments Off on Spark of the Day! African drums, kilts and bagpipes…

Tagged as Music, Musical Fusion, Scotland, Spark of the Day