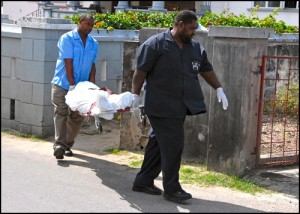 – Police say robbery is not motive. Victim may have seen something.

Was the elderly resident of Stanmore Terrace, Black Rock, St. Michael murdered at the beach or at another place and then dumped on the path? Paros are not unknown at Brighton Beach during the night.

Police are investigating and so far the below article at The Nation is the most complete story we’ve seen or heard.

The body of a 90-year-old man was discovered early this morning in a track leading to Brighton Beach St Michael.

Fred Parris of Stanmore Terrace, Black Rock St Michael, is believed to have died from stab wounds inflicted by an unknown assailant.