Coroner Faith Marshall-Harris says she will now “explore the possibility” of summonsing Professor Machel to the inquest. Hopefully he will be available. (Isn’t that exam time at a University?) He could have been given many months notice but the Coroner is laying this on at the last moment due to pressure from the Codrington family.

Attorney David Comissiong, who is representing the interest of Donavere Codrington, asked the court to also summon Professor Hans Machel, a specialist in earth and atmospheric science at the University of Alberta in Canada, who conducted an independent study of the cave after the apartment collapsed.

The coroner pointed out that she would explore the possibility of getting the professor here.

Coroner Faith Marshall-Harris summonsed over 70 witnesses to the ongoing Inquest into the deaths of five members of the Codrington family, who died in 2007 when their home fell into a collapsing cave.

Barbados Free Press has learned that the Coroner did not summons University of Alberta Earth Sciences Professor Hans Machel (photo above) – nor has he ever been contacted by the Coroner’s staff or investigators despite Machel’s offers to provide the evidence and information he and his team collected about the Arch Cot cave-in and deaths.

Sources close to the Codrington family inform Barbados Free Press that the family is most interested in having Professor Machel attend the next inquest date on Friday, December 3, 2010, and the site visit to Arch Cot Terrace scheduled for that same day.

There is despair among some family members that “This inquest is being stage-managed like a play with only certain actors allowed to take part.”

It is obvious that the people who run Barbados do not want to see the evidence that Professor Machel and his team gathered during his publicly reported investigations into the Codrington deaths.

Professor Machel’s contact information is easily available on the internet. It’s the first hit when you Google his name. That’s how BFP was able to contact him.

The contact information is posted publicly on Machel’s own website and the University of Alberta websites, so he won’t mind the information repeated here for Coroner Marshall-Harris and her staff – should the Coroner change her mind about issuing him a summons to the inquest…

Hans Machel
University of Alberta
Faculty of Science, Earth & Atmospheric Sciences
780-492-5659 (phone)
780-492-2030 (fax)
emails (two on public record on the internet via Google. Unknown if one or both are valid, so send to both)
hmachel@ualberta.ca
Hans.Machel@ualberta.ca

As detailed in several Barbados Free Press articles over the past three years, Professor Machel has been at the forefront of demanding an inquest for the Codrington deaths.

“The most detailed public reports produced so far on the Arch Cot building collapse disaster were written by a Bajan and a Canadian who together launched an investigation when it became obvious the authorities were in cover-up mode.

Bajan Richard Goddard (former police officer) and Professor Hans G. Machel (Professor of Earth and Atmospheric Sciences, University of Alberta) collaborated during their investigations. They interviewed, observed, photographed, gathered evidence and rock samples at the disaster scene and wrote public reports – first at Barbados Free Press, and then in the Barbados Advocate when that paper was eventually shamed into printing a heavily edited version their reports.”

Professor Machel recently told Barbados Free Press that he had no knowledge that an inquest had been called until he was contacted by BFP’s Cliverton on October 10, 2010.

He continued, “I would be happy to testify, as I have stated before in my newspaper articles in the Barbados Advocate and in my various writings that were posted in BFP.”

The professor told BFP that he is already scheduled to return to the island in December for two to three weeks, so he is available should he be summonsed.

Is Machel’s story of witness intimidation too inconvenient for the Coroner?

In an earlier exclusive to Barbados Free Press, Professor Machel told of the intimidation of Arch Cot witnesses…

“We now know the names of those who worked to remove the legal obstacles to built on the land that this house stood on, land that was not to be built on. We shall disclose this information in due time.”

“I found out very quickly that the deaths of the Codrington family were entirely avoidable for two reasons: the house that they had lived in should never have been built on that site, and the imminent collapse of the huge cave underneath was not recognized or ignored.”

“I found out many more things that the public has a right to know but that have been hidden so far. I encountered an atmosphere of frustration and intimidation, nourished especially under the previous BLP government. I met several individuals who were afraid to speak out for fear of loosing their jobs, bodily harm, or having their houses burnt down, if they ever went public with what they know. I will speak for them. And should the day come, I am prepared to testify in any court of law under oath.” 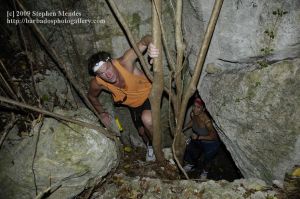 When Professor Han Machel isn’t teaching in Alberta or writing another book about the geology of Barbados, he can be found crawling around some of our caves. For some wild and wonderful photos of the hidden world under your feet, check out the website of Stephen Mendes. (Above photo of Professor Machel courtesy of Stephen Mendes)