Barbados celebrates yet another loan. We scored US$45 million!

Who cares what it’s for. We just scored another US$45 million. We can’t tell you what we did with the last US$10 million EU sugar money or the money we borrowed for development of a standards organization, but if no one is really doing any follow up to confirm where the money went, hey… that’s just life on this island.

Can anyone tell me how much we owe, the list of loans for the last ten years, and the interest payments – in real dollars and as a percentage of the GNP? And, oh yeah… can anyone say what we did with all the money we borrowed in the last ten years? Is there a list of benefits or assets for the expenditure of all that money? 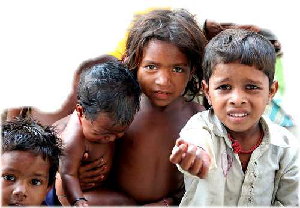 Street vendor and beggar children are everywhere in the poorer countries. Central America, Mexico, South America, India, Philippines. They are everywhere. You stop for a traffic light or get caught in slow traffic and they descend upon your car like a swarm of sad eyed locusts offering flowers, mini-packs of Winston cigarettes, rusted cans of beer, matches and, occasionally, themselves.

Better than ten years ago I was trying to escape Kolkata, India on a cantankerous Convair when a tiny street girl offered to sell me a stone. This wasn’t some pretty polished rock, it was a piece of gravel she picked up on the road. She might have been six or seven years old. It’s difficult to judge because the street children are so small and thin.

I knew enough to take the stone into my hand, shake my head “no” and give it back to her with a loud angry word – all the while concealing one folded-up-so-tiny US dollar under the stone. She knew to act frightened and back away but her eyes said “thank you”. It was (and still is) a necessary bit of theatre designed to fool the child’s master and the other beggars.

My companion said something like, “You only encourage them, you know.”

I replied, “Without the dollar, she won’t eat.”

… by Robert, who in all these years has never been able to forget the little girl with the stone.

Thanks to Raghubar Jha for the photo of the children beggars. See Child Begging, the bane of modern India

17 responses to “Barbados celebrates yet another loan. We scored US$45 million!”