Can we recover what we once had?

In today’s Nation … “Arthur knocks poor work ethic.” The Unions of course do not wish to acknowledge this.  “We must not allow this country to fail because of our deficiency in maintaining an attribute that used to be commonplace, but now is becoming scarce,” he said.

He failed to mention we also have become arrogant and unmannerly.

Nor did he mention that we are among the finest rhetorical speakers in the world.  Nuff talk and no action.

Relocation of Endangered Parrots Delayed by Barbados Ministry of Environment 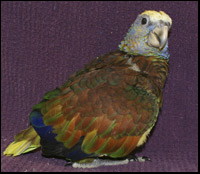 Only one zoo in North America outside of St. Vincent and Graeme Hall Nature Sanctuary has managed to breed rare St. Vincent Amazon parrot.

Officials at the Graeme Hall Nature Sanctuary are still waiting for a response from the Barbados Ministry of Environment regarding a proposed transfer of the Sanctuary’s endangered St. Vincent Amazon parrot collection to an offshore location.

Recent break-ins, wildlife poaching and pollution are forcing the Sanctuary to seek temporary safe-haven for the collection.  The parrots at Graeme Hall are the national bird of St. Vincent, and the only such population in Barbados.

Earlier this year one of the St. Vincent parrots was found dead after being assaulted by intruders.  Unpredictable water quality, security and other factors are major concerns for the internationally-recognized St. Vincent breeding programme in Barbados. END_OF_DOCUMENT_TOKEN_TO_BE_REPLACED

Who will be the next elected Prime Minister of Barbados?

WHEN David Thompson resigns, who will assume the leadership of the DLP and Barbados?

A Nation commissioned poll states that 35% of Barbadians support Chris Sinckler (photo above) for our next leader if WHEN current PM David Thompson is unable to carry on in the position due to his ongoing battle with pancreatic cancer.

23% of respondents support current Acting Prime Minister Freundel Stuart, while the third choice is Ronald Jones – although with 10% it can be argued that Mr. Jones is out of serious contention. If our leadership conferences were about the party membership and not about the elites imposing their will upon the members, Jones has enough influence to be a “king maker” by throwing his support behind Stuart.

But that’s another system of politics and not ours.

While Mr. Jones is busy declaring that David Thompson is Prime Minister and we shouldn’t even be talking about Thompson’s replacement, the rest of the island has already moved on to the next step – and that includes the Barbados Labour Party.

At this moment, would Mottley, Arthur or someone else give the BLP the greatest chance of success in the next election? END_OF_DOCUMENT_TOKEN_TO_BE_REPLACED

Dear Mia Mottley, this video is for you!

Not so long ago, then Deputy Prime Minister Mia Mottley went on the record saying Internet blogs “Marginalize…Parliament” and called for the regulation of blogs and call-in shows on radio and television. As the election of January 2008 showed, Mottley and the BLP were correct to fear any mechanism that allowed citizens to discuss issues in public without her government’s consent or censorship.

Lately the Director of Public Prosecutions and the Police Commissioner have been making similar noises about controlling citizen conversations on the internet. We’ll address their recent statements when we’re finished dealing with the flooding and water outage that has killed most of our activity for the last few days. (Big shout out to an old friend who suggested this video. And yes, we get the message ourselves and we’re working on putting BFP on FaceBook but we’ve been a busy lately like everyone.)

Until we get the mess cleaned up though, here’s a video for Mia Mottley, Police Commissioner Dottin and DPP Charles Leacock.

We hope they enjoy it as much as we did!

Comments Off on Dear Mia Mottley, this video is for you!