Hafeez Karamath Construction Ltd was an active receiver of Barbados contracts under the Owen Arthur – Mia Mottley BLP government, and probably returned the favour at the very least in the form of ‘political donations’ to the Barbados Labour Party.

So what happened after the raid? Did the DLP Barbados government follow up with Trinidadian authorities?

To our knowledge the story just faded into nothing… just like all such stories ’bout hey. Not a follow-up by the Barbados news media. Not a question in Parliament by government members.

Nope. When a corrupt government contractor gets raided by police, it all just fades into the fog of the news cycle and pretty soon the people forget. They assume that some resolution happened.

BFP doesn’t forget, and so we bring this story back in the hope that our readers can contribute to the group knowledge. We also bring it back to remind folks ’bout hey just how controlled the so-called professional news media is on this rock… 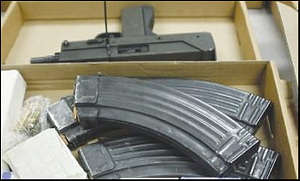 Trinidad and Tobago police just raided the home and offices of deceased millionaire contractor Hafeez Karamath as part of the ongoing probe of corruption at the Urban Development Corporation of Trinidad and Tobago and found much more than they bargained for.

Police were looking for documents relating to Karamath’s companies and their relationship with the T&T government but besides thousands of business records they ended up with 18 firearms, a stack of ammunition, a drug manufacturing facility and a casino.

Six of Karamath’s relatives have been arrested, but what we want to know is if the Anti-Corruption Investigation Bureau (ACIB) found any paperwork relating to Karamath’s connections to the Barbados politicians and officials who awarded him big government contracts here.

Karamath’s companies received government contracts throughout the Caribbean worth hundreds of millions of dollars… and we all know how things work. Now many of the corrupt contractor’s business records and communications are in the hands of anti-corruption investigators. There must be a few Barbados politicians with indigestion this weekend!

Hafeez Karamath (left) died of cancer in November 2009 and his 23 year old son and other relatives carried on running his companies. In 2006 Karamath was charged with fraud by T&T over some insider bribes to obtain government contracts. In April of 2007, Hafeez Karamath Construction Ltd (HKCL) was fired by the Barbados BLP government after a four year debacle over the unfinished Newton Business Park in Christ Church but then the news media sort of “lost interest”…

You know how that works.

Some of BFP’s readers put together information about Karamath and the BLP government contract back in April of 2007. You can read the discussion here.

Will the Trinidad & Tobago Anti-Corruption Investigators cover-up for the Mottley Arthur Government?

According to the T&T news media, corruption investigators found a treasure trove of documents, computers and business records. How much did Hafeez Karamath provide in “political donations” to Owen Arthur, Mia Mottley and other BLP politicians?

Some of that evidence is probably in those seized records.

Machine guns. Drugs. Illegal casino. Bribery of government officials in T&T. Kickbacks, bid-rigging and failed projects going back to the 1990’s. That’s Hafeez Karamath and his family. That’s the kind of people who Mia Mottley and Owen Arthur awarded Barbados Government contracts to.

Will Bajans ever learn the truth about the millions of dollars given by businesses and special interests to our elected and appointed government officials?

In our opinion, it’s unlikely because as BLP Member of Parliament Dr. Duguid said, Barbados politicians aren’t about to vote for integrity legislation or freedom of information.

Not to forget that the Bajan news media lacks the courage and integrity to go after the corruption that is endemic to our nation.

Sad, but that’s the truth on this Saturday night somewhere near Grape Hall.