Hafeez Karamath Construction Ltd was an active receiver of Barbados contracts under the Owen Arthur – Mia Mottley BLP government, and probably returned the favour at the very least in the form of ‘political donations’ to the Barbados Labour Party.

So what happened after the raid? Did the DLP Barbados government follow up with Trinidadian authorities?

To our knowledge the story just faded into nothing… just like all such stories ’bout hey. Not a follow-up by the Barbados news media. Not a question in Parliament by government members.

Nope. When a corrupt government contractor gets raided by police, it all just fades into the fog of the news cycle and pretty soon the people forget. They assume that some resolution happened.

BFP doesn’t forget, and so we bring this story back in the hope that our readers can contribute to the group knowledge. We also bring it back to remind folks ’bout hey just how controlled the so-called professional news media is on this rock…

Trinidad and Tobago police just raided the home and offices of deceased millionaire contractor Hafeez Karamath as part of the ongoing probe of corruption at the Urban Development Corporation of Trinidad and Tobago and found much more than they bargained for.

Police were looking for documents relating to Karamath’s companies and their relationship with the T&T government but besides thousands of business records they ended up with 18 firearms, a stack of ammunition, a drug manufacturing facility and a casino.

Six of Karamath’s relatives have been arrested, but what we want to know is if the Anti-Corruption Investigation Bureau (ACIB) found any paperwork relating to Karamath’s connections to the Barbados politicians and officials who awarded him big government contracts here.

Karamath’s companies received government contracts throughout the Caribbean worth hundreds of millions of dollars… and we all know how things work. Now many of the corrupt contractor’s business records and communications are in the hands of anti-corruption investigators. There must be a few Barbados politicians with indigestion this weekend! END_OF_DOCUMENT_TOKEN_TO_BE_REPLACED

Laura Dekker’s surprise departure gives the slip to the press

Dutch solo sailor Laura Dekker was born on a sailboat off the New Zealand coast during her parents’ 7 year round the world voyage – so you could say she’s had some experience with the sea.

Now Laura intends to be the youngest person to sail solo around the world and if she follows her published track she’ll be stopping in Barbados after crossing the Atlantic from the Canary Islands. She left Lisbon, Portugal early this morning (Saturday August 21, 2010) in a surprise departure designed to fool the media that hired a local flotilla to take photos. END_OF_DOCUMENT_TOKEN_TO_BE_REPLACED 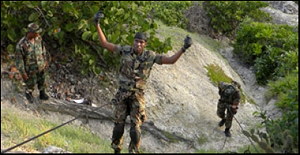 Looters who had arrived on the scene earlier could be seen scampering for cover, as camouflaged officers descended the cliffs seeking out the injured.

It took almost two hours for the search team to find victims and bring them to the cliff tops, where waiting colleagues assessed injuries and quickly sent fresh teams down to rescue other victims.”

Is there no sober editor or journalist at The Nation newspaper?

We read The Nation article several times looking for the names of the victims and the helicopter company before we realised that The Nation reporter was talking about a simulated helicopter crash staged as part of a training programme for the Regional Security Service. We originally thought that the helicopter had crashed off Cove Bay and members of the RSS were fortuitously able to respond.

After our confusion upon reading the article in The Nation, we went to the Barbados Advocate and read an excellent article on the same subject by Karen Alleyne. All we can say is that The Nation reporters and editor must have been drunk to print the garbage story that they did. END_OF_DOCUMENT_TOKEN_TO_BE_REPLACED

Comments Off on Please visit our friends at… Caribbean Spice Caterers!