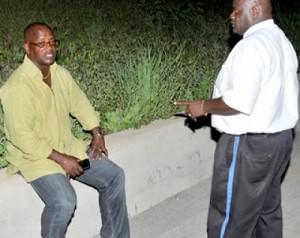 Dejected, petulant Noel Lynch hates freedom of speech – except when he needs it

Poor Noel “Instant Millionaire” Lynch is all upset that he showed up at the CBC on Tuesday night as an invited guest on Best and Mason – and was then uninvited and summarily ejected from the premises according to an article in The Nation.

Lynch is talking about the violation of his constitutional rights to freedom of expression and freedom of speech.

What a slimy hypocrite he is. Perhaps he needs a reminder of his own despicable attacks on freedom of speech when he was a big shot government minister.

While we believe that Noel Lynch should have been allowed on the Best and Mason show and that there is no way that a major DLP supporter like Leroy Parris should have been put in charge of the CBC, we are taking immense pleasure in seeing former big shot Noel Lynch crawling on his belly begging for free speech in the media. Looks good on him!

What a slimy hypocrite you are. Before you continue begging for freedom of speech on your “I want to come back to the public trough tour” you have much to repent for. Here are a few reminders of your own despicable attacks on freedom of speech in Barbados…

1/ Tourism Minister Noel Lynch had columnist Adrian Loveridge fired from the Barbados Advocate newspaper by threatening the editor with the withdrawal of government advertising unless Loveridge was sacked.

2/ In March, 2007 Tourism Minister Noel Lynch had the StarCom Network ban Adrian Loveridge from the Down to Brass Tacks radio show as a condition of Lynch’s appearance.

This incident was most embarrassing for the StarCom Network as they had already issued an invitation to hotelier and freelance journalist Adrian Loveridge and he had accepted. After Barbados Free Press published the story of Minister Lynch’s attempt to deny freedom of speech to a citizen, outraged citizens deluged the radio show with emails. StarCom then re-invited Mr. Loveridge but put him in a separate studio upon the demand of Minister Lynch – so Mr. Lynch would not have to look at the face of the most knowledgable and effective tourism critic in Barbados.

3/ When asked about his personal assets during a radio-show interview, Minister Lynch threw down his earphones and stormed out of the studio. He then sued the radio station and the journalist host to ensure that never again would anyone have the freedom of speech to ask him the same question.

On March 25, 2007 thousands of listeners of the Down To Brass Tacks radio show were stunned as Barbados Minister of Tourism Noel Lynch ran out of the studio after being asked on air to comment about his personal wealth and Integrity Legislation. The emailed question from a listener and comments by moderator David Ellis abruptly ended the Minister’s participation as he angrily ripped off his headphones, stood up and left the studio.

The Voice of Barbados radio broadcast was immediately pulled off the internet so international audiences could not receive it and Noel Lynch sued everybody in sight. The broadcaster paid some $65,000 to Minister Lynch and promised that they would never again ask how it is that a politician who has done nothing but hold appointed and elected government positions could have such wealth.

That lesson killed freedom of speech for the entire Barbados news media: courtesy of Noel Lynch. After the BLP government was tossed by the electorate in January 2008, numerous journalists came forward to say that they lived in fear of Minister Lynch and his government and that press freedom was in jeopardy.

4/ Noel Lynch so killed freedom of speech in Barbados that even 3 years later journalists are still too frightened to mention his name concerning the Brass Tacks radio show.

Tagged as Barbados, Censorship, Freedom of Speech, Freedom Of The Press