“The members of the current management team must resign. They have failed, and the Symphony cannot afford to keep them in power. Begging for money is not a business plan; it is an act of desperation by people more concerned with keeping their jobs than solving the problems.”

Tourism consultant Bob Verdun is giving the free lecture tomorrow at the DLP Headquarters, but he promises it won’t be a DLP love-fest because he’ll hold nothing back.

Okay, we’ll listen to what he has to say with an open mind – especially after doing a Google search and finding a report he wrote back in 2006 slamming the management of the Kitchener Waterloo Symphony. Will Verdun hold back tomorrow about the Barbados Tourism Authority or will he say that which needs to be said? I guess we’ll see.

Amazing what you can find on Google. In 2006 Verdun ran for election for “Chair – Region of Waterloo” in Canada and lost. Then he took some flak for being a racist against Aboriginal Canadians after writing an article in The Nation. A Digital Journal story said of Verdun…

Bob Verdun is now on notice that him and the rest of the haters in Canada will not win in trying to re-write history and lie about how Canada’s First people are dealt with.

(Verdun said) “Canada allows (Aboriginal Canadians) to claim vast tracks of land for their exclusive use, but it’s never enough. Canada allows them to live a totally subsidised life on their reserves, never having to work if they choose not to . . . No amount of land, no amount of money, and no special privileges will ever satisfy people who are not motivated to advance themselves using their own ambition and ability”. 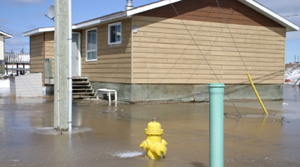 Not so fast, Bob!

I did a little research on Canada’s aboriginal tribes and how they live and I guess that Bob Verdun never heard of “Kashechewan First Nation” where thousands of people live “in squalor” and drug abuse and suicide are rampant. The Canadian government decided to move a bunch of aboriginal people so they built the community on a flood plain and put the water intake downstream from the sewerage outlet.

I don’t know much about it, but from what I find on the net, I don’t think that Canada’s aboriginals have the soft life that Mr. Verdun thinks they do.

*In my opinion Mr. Verdun’s statements about Natives in Canada don’t make him a racist of any kind, but it does mean that he should do more research. I also found historical articles online indicating that the Canadian government and churches in the late 1800’s and early 1900’s right up to 1960’s took native children from their families and put them in boarding schools. The intent, according to some, was to destroy the Native culture and religion by removing a generation and educating them “white”. The disastrous result is still being felt sixty or seventy years later as Canadian natives struggle to regain their culture and identity as well as their lands that they were swindled out of.

From what I read there are hundreds of land disputes throughout Canada where the natives were tricked into giving up lands or had the lands taken from them sometimes at gunpoint and they want that land back. That cities and towns have been built on the lands doesn’t change the fact that the lands were stolen and the Natives sometimes even have the legal documents and signed treaties to prove it.

Again, that history doesn’t make Mr. Verdun a racist, but his statements do make him seem uninformed about native Canadians, their history and their struggle over the centuries.

That issue aside, Mr. Verdun sounds like he’s going to let fly tomorrow and not worry about being politic. We’ll be watching!

Oh…. one more thing. What’s with that “Rogers” Canadian email, Bob? Time you got local!

Tourism is our number-one industry, but the competition is strong and becoming stronger.   Barbados has many advantages, but we can’t rest on our laurels!   Our economic freedom very much depends on our ability to attract growing numbers of satisfied visitors.

Please join me this Friday, June 25, at the Errol Barrow Gallery on George Street when I deliver the weekly lunchtime lecture on this topic:

“15 ways to improve our number-one industry without spending a new penny!”

Yes, these lectures take place at DLP headquarters, but this will definitely be a non-partisan presentation.  Indeed, I challenge any member of the BLP Opposition to offer a more comprehensive critique of Tourism in Barbados!   I will be positive and constructive, but also bold and blunt about what I see is wrong and how to fix it.   The people of Barbados deserve no less.

An optional (but outstanding) Bajan buffet lunch is available from 12:30 for only $15, and the lecture is scheduled to start at 1:00.

Bring your concerns and your questions.   This historic room has hosted many important debates that have done more for the future of Barbados than several limousines full of expensive visiting consultants.

* I added this indented section after reading Ian Bourne’s new article Canadian Investor confirms what Barbados Free Press already knew – Attacks in Boscobel. In that article Mr. Bourne inaccurately (and we feel unfairly) reports that Barbados Free Press made allegations in this article that Mr. Verdun is a racist. As you can read for yourself, BFP made no such allegations, we only reported what we found online about Mr. Verdun. To remove any doubt as to BFP’s position, I inserted the above paragraph in the wee hours of June 28, 2010.