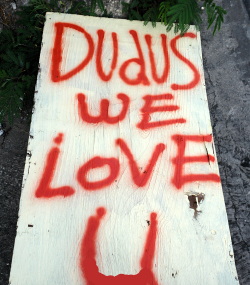 This sign was seen today (Monday May 24 Bank Holiday) on the left-hand side of Collymore Rock Road going towards Wildey from Bridgetown. Although badly painted, it was built as a stand up sign. For those who might not know (and I am sure you are all aware at Barbados Free Press) Dudus is the man behind the mass confusion and turmoil that Jamaica is in at the moment.

Should we in Barbados be worried about this show of solidarity with a known criminal wanted by the US so badly that his case has brought a whole island to almost a standstill and that has law-abiding citizens scared to even breathe?

I would like to think that this is a warning of things to come for us because if this is so, the powers that be can take action RIGHT NOW to put such solidarity with common criminals to rest! With an e-mail going around about the state of gangs already on the island, it does not augur well to even have one person loving Dudus! And certainly it is an affront to have this sign in full view of people from all walks of life and ages here on our island. I thought you all should know. Perhaps even try to investigate.

PS Whilst I usually fear no one…this time I ask that my name and e-mail address be kept out of the newspapers for my own security. And that says something!