Unable to make a living in the real world, former Tourism Minister Noel Lynch plots return to the public trough 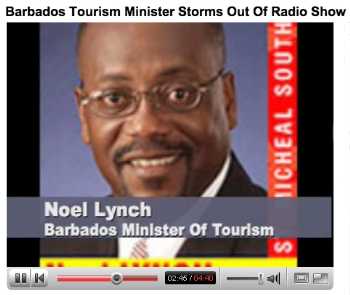 We heard a few weeks ago that former Tourism Minister Noel Lynch wasn’t doing so well out there in the real world where people expect performance, integrity and the ability to work alongside others without inspiring mass rebellion or multiple suicides amongst co-workers.

When Lynch lost his seat in the January 2008 elections he did nothing for almost a year and then in November 2008 took a job as a tourism consultant to the St. Vincent and the Grenadines government. Apparently St. Vincent was trying to replicate the failure and waste of money that Lynch engineered for Barbados during Cricket World Cup.

“Good luck to the Caribbean Hotel & Tourism Association (CHTA) – they will need it. The organisation hired defeated Barbados Tourism Minister Noel Lynch as its new Deputy Director General and Director of Membership.

Hey, we hope the CHTA has much more luck than Barbados citizens did in getting accountability and answers from Noel Lynch about where the money went when he was in charge.

Mr. Lynch was part of the cover-up that denied Barbados citizens any accountability for the hundreds of millions of dollars of their tax money thrown into the black hole known as the GEMS Scandal – Hotels and Resorts. And what a scam it was!

Then there was the disaster of the Cricket World Cup and the outright lies Lynch told us about the event even when it was plainly apparent to all that he was lying. Lynch settles upon a fiction in his mind and that becomes reality. Cricket World Cup was his baby and it was a frankenstein that will take us a generation or more to pay off.”

Today the Nation newspaper is reporting that Noel Lynch was denied a US work visa and this is why he has ceased working for the Caribbean Hotel and Tourism Association. That bit of news is probably true, but it inspires so many other questions not the least of which is… why did the US government deny such a high-profile former government minister a work permit for an organisation dedicated to the Caribbean?

Then we heard that is wasn’t really about the working visa – it was about the fact that Noel Lynch couldn’t get along with his boss and the board. Truth? Rumour? Who knows!

All we can tell you is that Noel Lynch and the Caribbean Hotel and Tourism Association parted ways and Lynch is hoping to make a political comeback in Barbados. Lynch is hoping that the stupid voters have forgotten about Cricket World Cup, the GEMS Hotels money-pit and how he ran away from a talk radio show when the moderator asked him live on air how he became a millionaire on a government salary!

Sunday night was just like old times… Mia Mottley, Noel Lynch and Dale Marshall – three senior members of what was arguably the most corrupt government this country has ever known – at a public meeting calling for “accountability” from the David Thompson government.

Start with yourself. Have a listen to your cowardly performance on Brass Tacks Radio where you ran out the door when the issue of integrity legislation and your assets were raised. Here’s the YouTube recording where you ran away from accountability to the voters.

Welcome back to Bajan politics Noel. Your return is the best thing to happen to the DLP since Mia Mottley’s daddy bullied the Barbados Labour Party into making his little girl the “leader”.