President Obama and the Goldman Sachs campaign funds: An impossible discussion in Barbados. 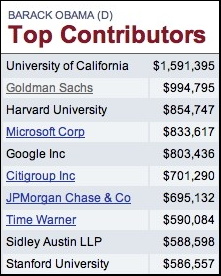 President Obama is being called upon to return the almost one million dollars that his campaign received from Goldman Sachs employees – in light of securities fraud civil charges now faced by that company. The calls to return the campaign funds also concern the fact that Goldman Sachs received big money from the Federal Government bailout program and that thought riles many Republican and Democratic voters.

In light of everything, I can see folks demanding that this money should be returned, but I can also see the point that this money was donated to the Obama campaign by individual employees – not by Goldman Sachs the company – and therefore should not be returned. The entire issue is receiving extensive news coverage as the Americans debate and discuss.

An impossible debate in Barbados

The interesting thing about this issue though is that the American voters are able to have the debate because under their election laws the parties and politicians have to keep financial records and those records are open to public scrutiny.

It helps to keep everything honest – which is why our Barbados politicians won’t stand for such a requirement.

We know from the past that Bajan politicians receive “campaign donations” and “accidentally” put them into their personal bank accounts and “forget” to inform anyone about these donations. Former Prime Minister Owen Arthur was caught red-handed corruptly putting a cheque for $75,000 into his personal bank account. If it weren’t for then Opposition Leader David Thompson waving a copy of that cheque around at an election rally, that $75,000 would never have seen the light of day from Owen Arthur’s personal expenses.

And that’s only one cheque to one politician on one day.

Barbados needs to have proper election financing laws if we are ever to break free from the current system of government that is best described as a kleptocracy, but the current Thompson DLP government isn’t about to implement an elections financing law and neither are the BLP if that party ever waddles back into power under Mia Mottley’s ah, er, “leadership”.

How much in election funding did CLICO & CL Financial group of companies give to the DLP and BLP?

How much in election funding did VECO give to the Arthur/Mottley BLP government?

Why can’t the Barbados public know the answers to those questions?

4 responses to “President Obama and the Goldman Sachs campaign funds: An impossible discussion in Barbados.”