We see that Liz Thompson got her little job at the United Nations complete with champagne and pate. She’s now an executive coordinator for the UN Sustainable Development conference to be held in Brazil in 2012. And, get this: she has a level of an “Assistant Secretary General”.

Liz Thompson says it’s good for Barbados. We say it might be good for the elites to grab some additional Climate Change money. How that helps Barbados we have no idea because none of the money seems to reach the trash on the beach or helps to stop the ever-growing wall of concrete. It doesn’t get us back our two promised but never arrived National Parks at Scotland and Graeme Hall.

Nope, Liz Thompson’s record is of all talk and no action. In fourteen years she and her BLP government never passed Environmental Protection Legislation. She couldn’t be bothered to make pipeline and oil tank operators check for leakage every day and as a result wells on the South Coast are still full of jet fuel from the Shell pipeline leak.

We opposed Thompson when she previously applied for a UN Environmental job and we oppose her new appointment. You will hear no congratulations or celebration from us and thousands of other environmentally-conscious citizens, because the words of one of our readers still ring true…

“Let the UN Selection Committee come to Barbados and see for themselves the results of Liz Thompson’s betrayal of our environment.”

The UNFCCC (United Nations Framework Convention on Climate Change) is an international treaty designed to address “what can be done to reduce global warming and to cope with whatever temperature increases are inevitable.” (UNFCCC website link)

“What can be done…” As in Doing. Action. Actual results.

As Environment Minister, Liz Thompson loved talking the environmental buzz words of the day and jetting around the world to talk some more. Liz and her Arthur/Mottley BLP government became pretty good at talk because the talk brought in money from the international community in the form of grants, loans and development funds. Say the right words: get the money. Global warming was and continues to be a “hot topic” (sorry, couldn’t help it!) but for Liz and the Barbados Government it was only about the money.

How do we know that money was the motivator for “environmentalist” Liz Thompson & her government?

Easy. Look at the disconnect between Liz Thompson’s international talk and the reality of how little she and her government cared about the environment back home.

While Liz Thompson and her fellow elites were sipping champagne in Zurich, back in Barbados we citizens had to live with the reality of ongoing, unchecked environmental damage on numerous fronts, government-empowerment of polluters, and a policy of wholesale development at any environmental cost in the name of profit.

Sustainable?  Take a look at the results of the BLP policy of walling off the west coast with condos, dumping raw sewage into the RAMSAR wetlands on the south coast and selling off public green space to developer friends.

Not to forget a hugely important piece of the picture: Barbados has no environmental legislation because it wasn’t important to Liz Thompson and the BLP for the 14 years they were in power.

That’s right – folks at the United Nations should know that Barbados has no environmental legislation thanks to the failure of Liz Thompson and her government to make the environment a priority. The environment wasn’t even on the radar for the Liz Thompson BLP Government as they ignored water and sewer infrastructure and embraced failed mega-projects that created more pollution. We blew $300 million on a cricket palace while sewage seeps into our water system and half of the clean water we do produce leaks out of hundred-year-old mains.

We have jet fuel in wells on the south coast because Liz Thompson and her government never cared enough about the environment to pass a law requiring pipeline and holding tank operators to take daily measurements and immediately report leakage. The direct result of Liz Thompson’s neglect: Shell Oil put half a million gallons of poison into the water table before anyone knew what was happening.

Under Liz Thompson’s watch, her government fought against the recommendations of environmental experts, engineers and citizens and blew 100 million dollars or thereabouts in a failed project to turn the unstable Greenland watershed into a garbage dump. No engineer or contractor will take responsibility of a leachate treatment plant, liners & foundations built on unstable soil – but Liz Thompson pressed ahead.

Under Liz Thompson’s watch, Barbados became a trash dump with no laws against chemical dumping or disposal of hazardous materials. Barbados politicians don’t like to pass laws that inconvenience companies that provide campaign donations.

Under Liz Thompson’s watch, Barbados developed a public transportation policy of more cars on more roads for longer times – as if more autos were the answer to the problem of too many autos.

Under Liz Thompson’s watch, Barbados continued (and continues) to have no building code in law governing structure, energy efficiency or waste disposal standards for the construction of homes and businesses.

All this after 14 years of majority government for Environment Minister Liz Thompson’s BLP.

In 14 years Liz Thompson’s BLP government didn’t propose environmental legislation because it wasn’t important to them.

When Minister Liz Thompson’s spouse was awarded a $300,000 contract for asbestos removal – work he had no experience doing – That’s Corrupt! 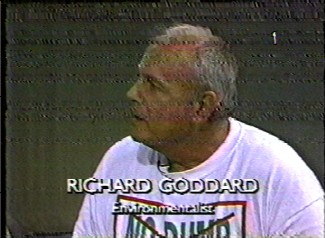 Click on the photo to see and hear Government Minister Liz Thompson disenfranchise a citizen because of his race.

In February of 1995, then Minister of Health Elizabeth Thompson participated in a debate about the decision of the Barbados Government to place a garbage dump in the Greenland watershed. In reply to environmental activist Richard Goddard’s determination use the international media to sway the court of public opinion against the Barbados Government, Minister Thompson said…

“I take extreme offense at a Caucasian male telling me, as a Minister of Government in modern Barbados, that he is going to threaten to embarrass a national government in this way. It is completely unacceptable…”

…Government Minister Liz Thompson disenfranchises citizen Richard Goddard because of his race – during a televised debate over Minister Thompson’s decision to put a garbage dump on the Greenland watershed.

Mr. Goddard is, of course, a citizen of Barbados with lighter skin than some others. Oh yes… he’s a male, too.

Race was not a part of the discussion until Liz Thompson took exception to the colour of Mr. Goddard’s skin. Ms. Thompson never apologized for her racially charged words or admitted how offensive and inappropriate they are. You can hear Liz Thompson yourself at our article Barbados Environment Minister Uses “Caucasian” as Racial Slur.

Concerned Bajan citizens of all colours hope that the United Nations selection committee will carefully consider all of the above in deciding whether Liz Thompson is a proper choice for Secretary of The UNFCCC (United Nations Framework Convention on Climate Change).

Parts of this article were submitted by BFP reader “nevermindkurt”

Here is the news story promotional piece in the Nation. You should read it at the Nation’s website, but we’ll reprint the entire thing here in case the newspaper changes history at a later day as it often does…

UNITED NATIONS – Barbados has nominated a former Minister of the Environment, Senator Liz Thompson, for a top international leadership position on climate change at the United Nations.

Thompson, who received the Champion Of The Earth Award in 2008, perhaps the highest global environment accolade given by the United Nations Environmental Programme (UNEP) has been nominated for the position of executive secretary of United Nations Framework Convention on Climate Change.

If chosen for the top job by United Nations secretary-general Ban Ki-Moon, Thompson would become an assistant secretary-general of the UN responsible for the world body’s global climate change negotiations and programmes.

“The UN secretary-general has invited nominations from member states for this high-level job and it was recognised that Senator Thompson is uniquely qualified for it, given her vast experience as a Cabinet minister and her deep interest in the environment, not to mention the global recognition she has received for work in that area,” said a well-placed source familiar with the process.

“Ultimately, the UN secretary-general will select the executive secretary for climate change and Senator Thompson is competing with a handful of other candidates. But she is coming to the process with a lot going for her. She has been directly involved in the climate change debate at the international level for many years.

“She helped to craft the Bali-action on climate change which is the basis for the negotiations to arrive at an international climate change agreement,” the source said.

Barbados has decided to move forward with Thompson’s nomination, added the source, because the country believes she is well known in the international environment arena as seen in the fact that the Champion Of The Earth Award has gone to some prominent international figures ranging from former United States vice president Al Gore and the last Soviet Union leader, Mikhail Gorbachev, to former United States Senator Tim Worth, Helen Clarke, a former prime minister of New Zealand and Thabo Mbeki, who until recently was president of South Africa.

It is understood that Opposition Leader Mia Mottley was aware and supports the nomination by the David Thompson-led administration.

Senator Thompson is a University of the West Indies trained lawyer who later earned a Master’s degree in business administration from the University of Liverpool in 2008.

She was also awarded a Master’s in energy and environmental law by Robert Gordon University in Scotland. In addition, she is formally trained in international negotiations.