It’s nice to see that the Prime Minister’s choice for Ambassador for Culture and Youth has finally found a decent boyfriend named Matt Kemp who respects the girl enough to get her everything she could want for her birthday.

“Bridget the Midget“ (Wikipedia link) as Miss Powers is “professionally” known, recently appeared at Rihanna’s birthday party complete with leathers and whip and put on a lovely personal performance for our Culture and Youth Ambassador.

Dear Rihanna: If you swim in a sewer…

Dear Rihanna: Why didn’t you walk out?

Yup. What a class act and trio: Matt Kemp for even thinking of such a “birthday gift”, Rihanna: for not leaving the room…

…and Bridget the Midget? You can hardly blame her. For 15 years she’s been willing to do pretty well anything for money according to several online interviews. Hey… Bridget can apparently do some wild things that involve launching eggs across the room. I wonder if that was part the entertainment for Rihanna? 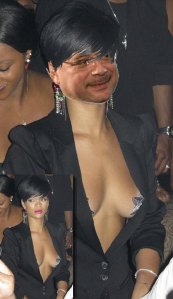 Mr. Prime Minister… It’s about time, isn’t it? You got us into this. Whatcha gin do ’bout it?

Bizarre Mag: Interview with Bridget the Midget (WARNING: Not suitable for work – or really anyone or anyplace.)

“But don’t expect the Barbadians to find fault. Three years ago, Barbados Maritime Ship Registry (BMSR) issued new guidelines for investigators of marine accidents. As the BMSR announced, the guidelines were introduced “to ensure that general marine investigations conducted on behalf of a flag state are focused on understanding the cause of an incident rather than simply apportioning blame. BMSR Principal Registrar Chris Sawyer believes that the culture of blame has become too prevalent in marine casualty investigations.

BMSR championed the priority of “learning from accidents.” While that is a fine goal, we tend to learn plenty when we figure out who if anyone is responsible for serious incidents like the Concordia’s loss. Too often in modern tragedies involving sailing ships, blame has been fobbed off on an act of God, with formal inquiries absolving ships, crews and owners of any responsibility, even when there is ample evidence of poor design, poor seamanship and other deficiencies.”

… from a media release by the Transportation Safety Board of Canada

The Canadians shouldn’t be so smug & self-righteous 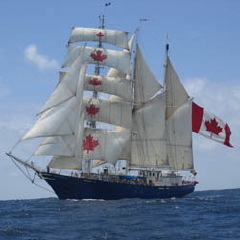 Let’s get one thing straight: the Canadians have a right to investigate whatever they please. After all, the Concordia was based in Canada, owned by a Canadian school and the majority of people on board were Canadians. The Canadians can make any inquiries they wish.

But Barbados has a duty in law to investigate the sinking of a Barbados-flagged vessel and our country shall investigate professionally according to our standards.

The Canadian authorities were happy enough to allow a Bajan “flag of convenience” on a vessel based in their country, so they might want to be a little careful criticizing Barbados now.

As to standards for the sailing vessel Concordia, she was built for the Canadians in Poland, first registered in the Bahamas and then in Barbados. The Canadian authorities inspected her last year to allow the vessel to participate in a tall ship rally in Canada.

Online conversations we’ve read at various tallship sailing forums describe the confusion, lapses and conflicts over stability standards for sailing school ships. From what I’ve seen Canada doesn’t even have any construction or stability standards for tall ships so the Canadian authorities should drop their self-righteousness and disdain for Barbados that is inherent in their press release.

It also turns out that Wojtek (Voytec) Wacowski, a crew member of the Tall Ship Amistad that visited Barbados in 2008, previously served as Chief Mate on the Concordia…