– Barbados-flagged sailing vessel sank on Wednesday afternoon. Automatic distress signal was sent.
– Brazilian Navy did not receive distress signal until many hours later.
– Upon receiving the signal Brazilian Navy tried unsuccessfully to contact vessel but did NOT send out search aircraft until 19 hours later – the next afternoon.
– Canadian military officials say search aircraft should have been launched immediately.
– Ship owner says Barbados Maritime ship Registry is looking into the search delay as well as the sinking.

The website of the Barbados Maritime Ship Registry (BMSR) in London, England, states that the Concordia should have received annual inspections to comply with international laws and Barbados’ requirements.

Strangely enough, the BMSR website features the Canadian S.V. Concordia on various pages. Nothing to do with the sinking – they just chose that vessel to illustrate the website.

No doubt the inspection record, design of the ship and the state of hatchways, watertight doors and open ports during normal cruising will be looked at, but without reaching any judgments until the event is looked at by experts, we should remember two basic things…

– The sea is inherently dangerous and unforgiving of the slightest error, incapacity or neglect.

– It is possible to do everything right and still lose a vessel to the sea. 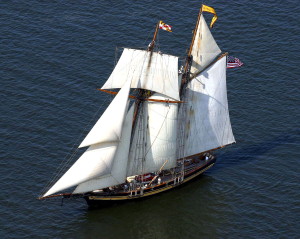 Pride of Baltimore sank in a similar incident in 1986

Not the first time a Microburst destroyed a seaworthy ship

Thanks to some input from one of our regular readers we researched the “microburst” event that the Concordia’s Captain says took down the ship in a matter of seconds. What we found was surprising: there is a long and well documented history of ships and airplanes being destroyed by this weather phenomena.

As usual, Wikipedia is a good place to start with their entries on Microburst and their List of microburst incidents. They also have an entry for “white squall” which some say is a microburst-associated event.

Many ships have gone down over the years, but this quote concerning the May 14, 1986 sinking of the sailing vessel Pride of Baltimore says it all…

“A tremendous whistling sound suddenly roared through the rigging and a wall of wind hit us in the back. The Pride heeled over in a matter of seconds. The 70-knot (130 km/h) wind pushed a 20-foot (6.1 m) high wall of water into the starboard side. She sank in minutes.”

Personal Locator Beacons – Why didn’t Concordia crew members have them?

They are about the size of a cell phone. They are waterproof – and they transmit a distress signal to satellites from anywhere in the world telling search and rescue and military agencies that you are in dire trouble. They say who you are and they broadcast signals to alert the world and to guide searchers to within 100 meters of your location anywhere in the world.

A Distress Radio Beacon fits in your pocket. It hangs on your belt.

It costs about US$400 from Sporty’s Pilot Shop via the internet.

None of the crew of the sunken school ship S.V. Concordia had one in their pocket or on on their belt when the vessel went down.

As our old friend Adrian Loveridge is fond of saying… “Let’s do the math.”

Your only child is going on a year-long cruise on a tall-ship. Crossing the Atlantic Ocean and confronting the worst that Mother Nature can conjure up.

Why wouldn’t you spend a lousy four hundred US dollars for your child’s safety? Why wouldn’t such beacons be mandatory for a certain percentage of crew members?

Something to think about on a Sunday evening in Barbados.