Unfair cartoon? The Truth? A little of both? 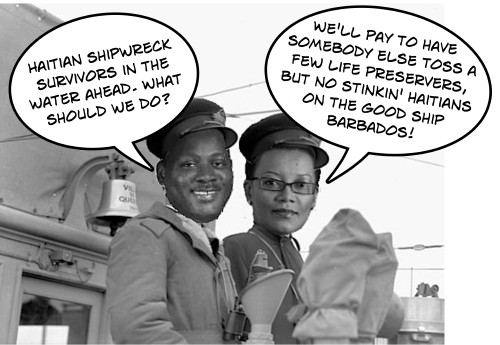 See BFP’s article Barbados refuses request to look after injured Haitians. “Even one is too many for our health care system” says Bajan Foreign Minister.

Barbados Government Official issues $400,000 in contracts to own company – but it’s legal thanks to Prime Minister Thompson 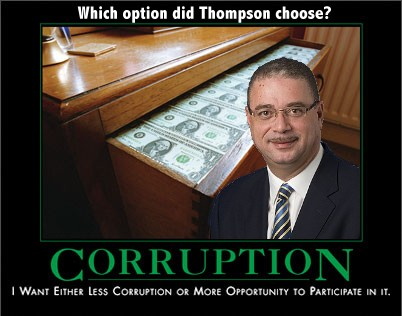 The Nation’s gossip writer at “Flying Fish & Cou Cou” is all excited and reports that a Barbados Government official has been caught out issuing government contracts to his own company without tender. The Nation writer is predicting that the government official will end up in court and wonders why a suspension hasn’t already been issued.

Let me say this about that…

1/ Barbados has a long tradition of elected and appointed Government officials issuing government contracts without tender to companies they have an interest in. Whether the company is actually in the name of the official or “owned and run” by their spouse or lover doesn’t matter. It’s all the same.

3/ When in government the BLP had enough sense to toss a few “no tender” contracts to businesses run by DLP members. Now the DLP government can’t prosecute any BLP members because the DLP took part in ripping off the public too.

4/ During the 2007 election campaign, Thompson and the DLP promised to introduce conflict of interest standards that would prohibit elected and appointed Government Officials from issuing government contracts to companies they owned themselves. Thompson promised in writing to implement this Ministerial Code standard “immediately” upon forming a government. This was not the promised ITAL integrity legislation – this was a Ministerial Code to simply be declared as policy on day one as Thompson promised.

5/ Thompson lied about introducing a Ministerial Code and did not do so. Barbados has no policy or integrity legislation that prevents Government officials from issuing government contracts to themselves. As a result the Thompson government is unable to prosecute the government official involved in the current Flying Fish & Cou Cou story.

6/ The Barbados news media will probably not print the name of the government official involved in the current scandal because the official did nothing wrong in law and they fear being sued. (Consider our past article Cowardly pee-in-pants Barbados Nation Newspaper hides name of corrupt Government Minister)

Welcome to Barbados, folks! When we elected Thompson and the DLP two years ago we thought the corruption would be cleaned up. We thought that Thompson was different and he would implement the promised integrity standards that no Barbados politicians have ever wanted to implement.

What suckers we were.

A PROBE into a certain department has unearthed such damning evidence that a well-known civil worker could find himself standing before a magistrate, or judge.

Cou Cou has received confirmation that the individual, who has certain responsibilities, out-sourced certain contractual works without going through any tendering process.

The varied tasks amounted to almost $400 000. But that is not the greatest howler.

Word is that the official outsourced the works to himself. Yes, to himself!

He apparently formed a company and gave himself the work, ignoring every financial rule of Government.

But the questions which need to be answered are: Why is he not on suspension?

And when will he appear on the court pages?