Does Environment Minister Lowe Pee in the Shower? He should… and so should you! 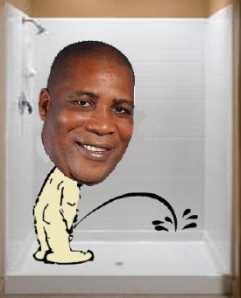 The Caribbean Drought and Precipitation Monitoring Network (CDPMN) says that Barbados will be hit by a severe drought for the next three months. Newspaper editorials and the government are urging Bajans not to waste water, and further to do everything they can to reduce the amount they normally use. (Nation News editorial: Wasting of water has to stop.)

There is one thing that all of us can do right now that saves thousands of gallons of water a year in each home where this water saving technique is used.

We can pee in the shower every morning instead of using a gallon of water to flush a tiny bit of urine down the toilet.

How much water can be saved? Lots and Lots!

Walk to your front door right now, stick your head out and take a look at all the homes around yours. Let’s see – there’s three people in that home, two in that one, four in that one – and each morning most every person flushes the toilet and then heads for the shower. Add it up just on your street: number of people X 1 gallon of water X 365 days. Now think of the entire country and say that only 10% of the homes were “pee in the shower” members. That’s still a huge amount of water saved.

Brazil did the numbers and realized just how effective this simple technique could be. Here’s the television advertisement they ran to convince their people to pee in the shower…

Here are a few articles about how important this initiative can be to saving water:

Bohemian Revolution: Pee in the shower to save water.

The Guardian: Peeing in the shower – The Rules

Huffington Post: Brazil wants its residents to pee in the shower

How About Some Leadership from the Thompson Government?

The stakes are high, the drought is coming and this one simple step has the potential to save millions of gallons a year in Barbados.

Yup, peeing in the shower sounds icky and it probably offends the Victorian sensibilities of some politicians in the DLP government – but it is a simple step that could be very effective nationally if folks were convinced of the need.

Will Environment Minister Denis Lowe now come out publicly with a statement that he pees in the shower? Will he encourage everyone to do the same?

Over to you, Minister Lowe!