I am a Student of Physics from Germany and I have been interested in Gerald Bull’s Project HARP for quite some time. But I have known Barbados for quite some time before, namely when there was the film about Thor Heyerdahl’s “Ra II” boat expedition on TV, which landed, as you surely know, in Barbados. Later I read about the four British who tried to cross the Atlantic by their Balloon “Small World” in 1958 but had to ditch and sailed in their boat-shaped gondola to Barbados where they arrived in early January 1959.

When I then did some research on Barbados, I also found Gerald Bull and HARP, and also your blog and a forum where the project was discussed. I liked that you reported on the project, but I did not like some of the posts in the Comments and in the other forum I mentioned. Concerning that forum, people claimed that the 16″ gun has been moved to Antigua (whereas it is still clearly there as your pictures and this one: http://www.panoramio.com/photo/3309540) or somebody claimed a military use of the gun and another one claimed that the final shot fired an Barbadian flag to Canada. The latter thing is impossible, as the gun has no azimuth drive.

Did you experience HARP for yourself or are you, like me, too young to have it seen yourself? I would like to talk to people who experienced it, as Bull is dead since 1990 as we know, and Dr. Charles Murphy (the BRL chief) died in 2003. If I remember correctly, somebody wrote in the comments to your article, that he still got two Martlet projectiles sitting in his garden. Is there more HARP evidence on Barbados? Is the launch control center in Paragon House still existing?

Student of Physics for a B.Sc. at the University of Osnabrueck
Project Vortex Project Leader
www.projectvortex.weebly.com

March 24, 2009 – We Missed The Anniversary Of Gerald Bull’s Murder – Barbados HARP Supergun Once Reached For Space From Our Island 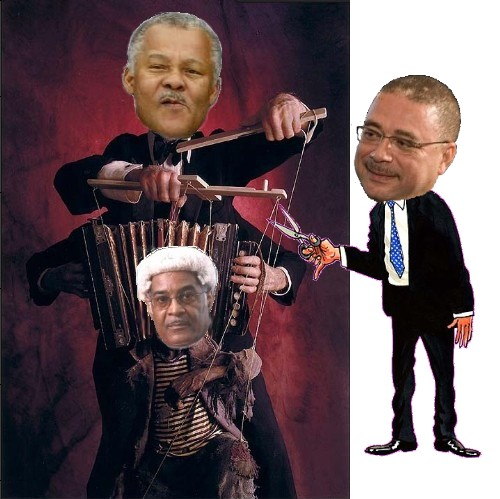 Professional politician, former Acting Prime Minister, Senior Cabinet Minister and Attorney General Sir David Simmons announced his resignation from the position of Chief Justice, effective April 29, 2010 – the day after his 70th birthday. Sir David refused to answer a reporters question about whether or not he asked to retain the position for another two years.

(Hmmmmm… that’s interesting. Why wouldn’t a person just say “No, I didn’t apply for an extension” ???)

Simmons’ announcement was no surprise. As we said in our June 28, 2009 article Let’s Hope Our Next Barbados Chief Justice Isn’t A Political Hack Like SIR David Simmons…

In any event, Simmons will be going and with him the most visible evidence of the successful Barbados Labour Party campaign to exert political control and influence in our Supreme Court and throughout the justice system.

Sir David’s appointment as Chief Justice was an overtly political act – a perverted act that was all about consolidating power for the BLP cabal under then PM Owen Arthur.

When the lifelong politician who was Attorney General under two governments and acting Prime Minister on many occasions became Chief Justice virtually overnight, it all but eliminated the separation of powers between the government and the judicial system. But then again, that was the plan.

With over 25 continuous years as a professional politician and only the last 7 years as a judge, David Simmons as the Chief Justice was, and still is, a political event.

Career politician is no independent judge

The courts in Barbados have always been a highly politicized but this reality moved to new heights during the BLP government when then-Prime Minister Owen Arthur appointed his long time political colleague and Attorney General as the Chief Justice of Barbados. The move effectively consolidated the power of the government and the courts under the control of Barbados political elites – and the image of both the courts and the Office of the Chief Justice have never recovered.

When David Anthony Cathcart Simmons agreed to accept the position from his old friend Owen Arthur, he brought the administration of justice in Barbados into disrepute.

It is the very presence of a career politician, former Attorney General and former Acting Prime Minister as Chief Justice that warns ordinary people that they haven’t a hope of seeing justice in Barbados.

Simmons didn’t care about the politicization of the court though: he reveled in it. He continued to attend political functions – even lending the credibility of the office of the Chief Justice to the Communist Chinese government that published articles bragging about Simmons’ attendance at embassy functions. We bet that SIR David Simmons never even considered whether or not it was ethical for the Chief Justice of Barbados to make a political statement of support for such a brutal government – but the Chinese news media were all over it telling their people that the highest judge in Barbados is a friend.

Chief Justice Simmons even bragged in the newspapers that he was continuing the revamp of the Barbados courts that he started as Attorney General. The pathetic man just doesn’t get it! He can’t see, or doesn’t care, how unethical it was for him to accept the position of Chief Justice. He singlehandedly did more damage to the public perception of the Barbados judicial system than any other individual since our independence.

As Chief Justice, Simmons continued making political speeches and consolidating power for the BLP. Unbelievably he called for the Police and Military to be united as one force answering to government. Like we said, he just doesn’t get what separation of powers or democracy is all about.

One thing is certain: if the Thompson Government has any integrity at all, our new Barbados Chief Justice will be a totally apolitical person whose very presence does not taint the entire justice system with the stink of partisan politics… as did SIR David Simmons for the last seven years.

October 24, 2007 The Independence Of The Chief Justice Of Barbados

Here is the Nation News article in full in case it somehow disappears as frequently happens when the Barbados news media decides at some later date that it wants to change history. We encourage readers to follow the link to read the article at The Nation News.

CHIEF JUSTICE SIR DAVID SIMMONS is calling it a day after seven years on the bench.