Al Barrack: the man who knows too much? 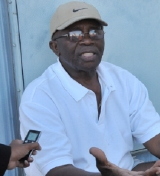 The Al Barrack story gets stranger and stranger at every turn. (See our previous story: Al Barrack is wrong: Justice and the Law are not for everyone in Barbados)

The Government of Barbados owes him $60 million dollars plus due to a court judgement, but won’t pay.

Something is wrong here, folks.

Keltruth Blog asks the questions that our Bajan media should have…

27 responses to “Al Barrack: the man who knows too much?”