With the current fuss in the news about our broken, corrupt and unreliable Land Titles system, this past article about one of the victims of that system deserves a read. Without a reliable, secure and accurate Land Titles system the crooks and their crooked lawyers descend upon the innocent and naive like flies to sugar. (We’re trying to maintain some standards ’round here, you can substitute any word for sugar that you like!)  🙂

As you read about Violet Beckles, be aware that this lawlessness surrounding the ownership of land in Barbados has been thriving for decades – and the lawyers like it so.

“When an incident happens in Barbados – any incident – we knowingly look to the status of the people involved and can usually predict the outcome. Is the victim a nobody, elderly, poor or especially a woman – and the other person one of the elites? We all say… tough luck sweetheart – you haven’t a chance of seeing justice!”

Old Ladies with land are fair game in Barbados 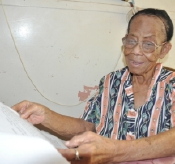 An old lady who has title deeds to what is now incredibly valuable land in Barbados will not stand in the way of “progress” as defined by the Barbados “mafia” who have spent decades waiting for her to die.

So far the informal coalition of lawyers, politicians, land developers and other big shots has been successful in keeping Violet Beckles running to and fro with a series of lawyers while construction on land claimed by her never stops and successive governments keep expropriating more of her land without waiting for definitive answers on her claims. END_OF_DOCUMENT_TOKEN_TO_BE_REPLACED