“Every day I check my one stop shop site for world (read ‘american’) news, huffington post, and I see something to indicate that as f*cked up as America is, and as IGNORANT as it’s citizens are, they do have one thing going for them.

The Good, The Bad & The LOL blog fires a broadside at David Thompson and the DLP for their phony election-only “commitment to integrity”.

“Jaws outside the meeting dropped too when it was revealed that despite all the balls, dinner dances, dances, coach trips and excursions organised by DLP UK down the years – not a single penny in donations has been received by DLP HQ since 1986. Stark contrast to the New York branch it must be said. Dutiful fully paid up members here are right in asking – where did all the money go ? Who had / has it ?”

… from the latest edition of the Ping Yark newsletter (PDF 3.1mb download here) 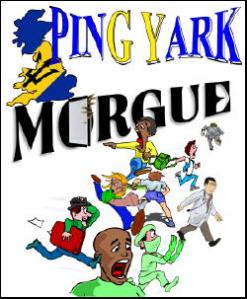 In the U.K. there is an irreverent newsletter called Ping Yark – published by homesick Bajans for other homesick Bajans. Leigh Bourne and a handful of others who refuse to surrender to Londontown publish Ping Yark quarterly in the U.K. … or to be more accurate…”more-less” quarterly.

Holding the newsletter in your hands, and turning each page, you will be rewarded with memories, current politics and many oh-so-secret secrets of the elites.

November’s edition is no exception. Here is a sample of some of the articles…

And here is an excerpt from another Ping Yark article…

The Heavy vs The Heavyweight. Mia Mottley: Interim leader? Owen Arthur wants his party back!

“OSA stood down as leader after defeat at the 2008 polls. Mia had long been touted as his successor and sure enough she gleefully stepped up to the plate. (pun intended !)

Big ceremony and everything.

Now, less than two years since stepping down ‘rumour’ has it our OSA wants his ball back. Rumour also has it that he never intended to stay away in the first place, he simply copied the actions of others – more recently PM David Thompson hisself (remember Mascoll?)- and allowed the deputy to take the flak only to ride in later like Lancelot and save the day.”