What are the functions and objectives of an independent Senator?

During the time the late Sir John Stanley Goddard sat in the Senate he repeatedly called for up-to-date financial statements for Hotels and Resorts Limited to be made available.

After all, it’s a majority Government owned company funded by the taxpayer and surely we have a right to know their current fiscal position?

I understand that HRL’s accounts have now been laid in Parliament
for the subsequent years since 2001, yet why has there seemingly been no Senate debate, discussion or public comment?

Losses for the GEMS project have been quoted at anything from $200 to $400 million, and as yet, no analysis has been in what part in the closure of over 30 private sector hotels over the last fifteen years they have played.

(Editor’s note: The headline “GEMS cover-up continues under DLP…” was created by Barbados Free Press. The body of the article is exactly as received from Mr. Loveridge)

THE HOYOS FILE – A GEM OF A FINANCIAL REPORT

WITH A SORT of morbid fascination, I have been revisiting the shipwreck that was Hotels & amp; Resorts Ltd, the above-ground financial counterpart of the Stavronikita at the end of 2001.

Yes, dear readers, I know this is almost December 2007 – so, you may wonder, what is the point? Well, there really isn’t any except that the 2001 accounts were only recently laid in Parliament along with the remainder of the company’s annual reports from 1997 to 2001, so I thought it would be “interesting” to recap the disastrous position GEMS had found itself in by then.

Writing in the notes to the financial statement for 2001, KPMG stated that “the company incurred a loss for the year ended December 31, 2001 of $22 million and had accumulated a deficit of $60 million at the year-end date. Also at that date, current liabilities exceeded current assets by $51 million. This raises substantial doubt that the company will be able to continue as a going concern without the continued financial support of its shareholders.”

$51 million? How did that happen? Current assets – which were made up of cash in hand as well as trade, VAT and other receivables, prepaid expenses and inventory – totalled a paltry $4.1 million, while current liabilities – the company’s bank overdraft, accounts payable and accrued expenses, a sum due to CRL Ltd, interest-bearing loans and interest payable – totalled $55.6 million. Subtract one from the other. END_OF_DOCUMENT_TOKEN_TO_BE_REPLACED 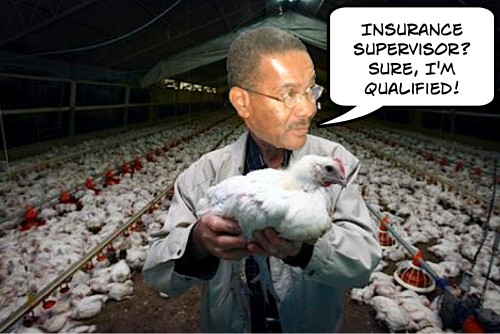 Prior to being appointed to his regulatory position, (current Barbados Supervisor of Insurance) Carlos Belgrave was the General Manager of a local company that manufactures “flour, animal and poultry feeds” … from OffshoreAlert’s 2006 “Worst Regulator” Award

Manulife Case Going To Trial in 2011

The civil court case involving Bajan policy holders who claim they were fleeced by Manulife will finally take place in 2011. Maybe. If the Manulife lawyers don’t do their “delay, delay, delay” thing until witnesses and victims die or move on after a decade of being under the oppression of being denied justice for so long.

If you want some background on the case and to read the court documents, they are posted online at the Sutts, Strosberg lawyers who are handling the class action. Here is their website: Manulife class action website

About That Inadequate Barbados Advocate Story…

“The suit claims that Manulife obtained approval for the sale of its Barbados interests by providing adequate information to the Supervisor of Insurance in Barbados.”

… from The Barbados Advocate article Manulife trial set for 2011

I guess that the reporters at the Advocate didn’t read the court documents about the case because if they did they would know that the plaintiffs are alleging that Manulife provided inadequate information to Barbados Supervisor of Insurance, Wismar Greaves, not “adequate” information as the news story says.

That is a small issue – a word that changes the whole meaning of the story – but it is important.

The larger issue about this story is unreported and unremarked upon by the Barbados news media: lawsuits cut two ways. The defense will undoubtedly claim that the fault lies not with Manulife, but with inadequate and/or incompetent performance by the Barbados Supervisor of Insurance.

In many ways, it will be the Wismar Greaves and our system of oversight that is on trial. Considering that Carlos Belgrave, our current Supervisor of Insurance, received the 2006 Offshore Alert award for “Worst Regulator” – I expect that Manulife will come on strong and aggressively defend this case.

No Sir, this Manulife case will be no “slam dunk”.

Contributed by an anonymous BFP reader

Belgrave named in 2006 as the “worst regulator” by Offshore Alert.

In Pursuit of Giants is the story of one man’s global trek to learn the fate of the ocean’s great fish—marlin, swordfish, and tuna. It is a journey into the history of big game sportfishing and a voyage of discovery to the few remaining locations in the world where these animals still exist in numbers and sizes that hint at their former abundance. It is also an investigation into the failure of fisheries management and an exploration into what must be done to save the world’s fisheries.

The last we heard Matt’s book was ahead of schedule and might even be out in time for the 2010 Christmas buying season. The BFP gang eagerly awaits our first read of In Pursuit of Giants.

Tagged as Barbados fishing, Environment, In Pursuit of Giants, Nature