You can’t ask for much better publicity than a US Navy aircrew member who comes home for the first time in 6 months and answers “Barbados!” when a reporter asks him about his favourite port.

Nope. Can’t do much better than that.

The USS Hawes is the same ship that our blogging friend Ian Bourne and his wife toured. Ian wrote a smashing article about the ship, its history and its Captain who is a woman. Here is Ian and the Mrs. with one of the pilots and a helicopter from the same Detachment as the fellow who said Barbados was his favourite place… 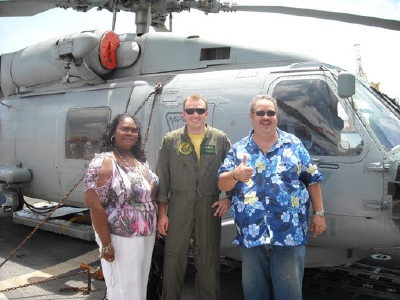 Click on the photo or this link to read Ian’s excellent article on the USS Hawes’ visit to Barbados: The Bajan Reporter – USS Hawes visits Barbados, American warship aided USS Cole off Yemen in 2000.