Report: Leroy Parris ‘may retire’ from CLICO. Question: Would they dare fire him?

Is Leroy Parris "The man who knows too much?"

CBC says it hears “reports” that the Chairman of CLICO Holdings will be retiring before the year end and that he made his intentions known to the board last Monday.

That is the story from CBC where last time we heard, Parris was still in charge. CBC says that Parris couldn’t be reached for comment – which is a rather strange admission from the CBC that they can’t reach the boss, don’t you think? Or maybe he keeps his phone number secret from the CBC?

So don’t call it a “report”; call it a “controlled leak” or “planted story”. The questions are “Who planted the story?” and “Why?”

“He has spent 30 years with CLICO Holdings moving its asset base from two million dollars to one point four billion dollars, and he has also been responsible for the development for all the subsidiaries of CLICO holdings.“

… from the CBC story CLICO Chairman may retire

Parris “responsible for the development for all the subsidiaries of CLICO holdings.”

It seems that the CBC “journalist” who wrote the story forgot about the collapse of CLICO and the revelations of fraud, excess and Florida swampland “investments” that devastated so many families. The journalist also forgot that so much of the four billion dollars in assets was inflated smoke that blew away leaving despair and human wreckage. There was big talk of criminal activities in Barbados and people going to jail until Prime Minister David Thompson stepped in and killed any kind of public accountability by appointing a secretive insider group to keep the lid on de boiling over pot. 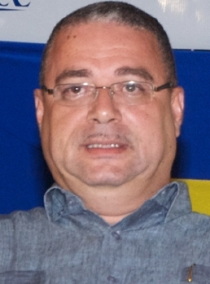 Notice how quiet Mottley and Arthur really are on CLICO and the relationship between Parris and Thompson? The BLP aren’t going to look under that rock, that’s fur sur!

They wouldn’t dare fire him. With most companies Parris would have been out the door for non-performance years ago, let alone the lack of audited statements. It was only after the house of cards collapsed that some of the truth came out. Independent fair market appraisals and reality showed that CLICO’s “four billion dollar” valuation was one big papered lie.

As the top man at CLICO Barbados, Leroy Parris was a big part of that lie.

So Prime Minister David Thompson will continue to shield his friend, and Leroy Parris will retire with honours and a full bank account while thousands of ordinary people suffer because of his actions and failures.

For some background and many links to relevant stories, please read our previous article…

Conflicts of Interest and Sinister Secrecy Continue in CLICO Scandal