The US Attorney’s Office and Federal Bureau of Investigation recently announced increased efforts to prosecute of human traffickers in American offshore territories. Guam and the Northern Marianas are of particular concern because the reported incidents of human trafficking doubled over the course of two years, according to the early 2008 statistics. The Caribbean is also being given special attention as an end destination in the distribution of sex and domestic workers who are at risk – some of whom are coming from far away in the Pacific, as reported in news stories sourced from the US Department of State.

Barbados came off badly in the 2009 Trafficking in Persons Report released by the United States when the country was placed in the “Tier Two” list of “countries considered to be making minimal efforts to satisfy the United Nations’ anti-trafficking in persons’ requirement”. Our Minister of Youth, Family and Sports, Dr. Esther Byer Suckoo, dismissed the United State’s concerns that our country is not doing enough to combat human trafficking, but the published allegation by the US State Department of Barbados’ “minimal efforts” has the ring of truth to citizens who know how things work ’round this place.

The US statement that Barbados does not do enough to combat human trafficking is now being put to the test as a prominent Barbados citizen recently posted information on a public website that he knows the identities of young girls being trafficked from the USA into the Caribbean – and that he is aware of current trafficking into Jamaica.

Writing under his own name on a local blog where he is a frequent contributor and featured author, Roosevelt O. King described how the young girls are brought from the USA to the Caribbean where they are prostituted to local men. According to Mr. King, who is Secretary General of the Barbados Association of Non-Governmental Organisations, the organisers of the trips also make pornographic movies for commercial purposes.

Although the story received heavy coverage and discussion on the Bajan internet, the mainstream Bajan news media have not reported the incident even though Mr. King’s allegations are still posted online under his own name. Certainly thousands in the Barbados online community are waiting to see if the Royal Barbados Police Force will launch an investigation or if the U.S. statement of “minimal efforts” will be proven true.

A reader comments on Dialysis at Barbados Queen Elizabeth Hospital

The following comment was left by BFP reader “decent boy” on our recent article Has it come to this in Barbados? Dialysis patients turned away due to shortage of needles, gloves, standard supplies.

“Decent boy” seems to have an insider’s perspective and we thought his comment might produce some worthwhile discussion. Take it away “decent boy”… 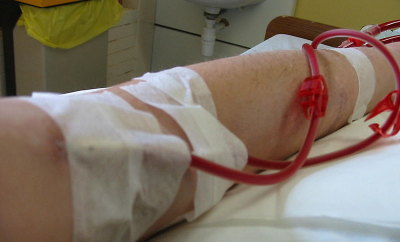 The reality is that Barbadians have come to expect international best practice standards totally free of cost, whilst Government has serious limitations on the amount of funds available. The most complex surgeries such as open heart surgery, coupled with treatment like dialysis are not cheap and cannot be gotten in most developed countries for free.

“The unavailability of some supplies in the AKU dept of QEH was not due to a lack of funds. It was due to improper* coordination between the Procurement, AKU and Finance Dept.”

I am very familiar with the issues. Furthermore, there was no compromising on the health of the patients on dialysis. The nepthologist took the decision to reduce the number of dialysis from 3 to 2 per week. Once patients eat the right foods and do the other things that doctor orders, there was no risk to patients.

Furthermore, at a cost of $52,000 per patient per year, and with the space constraint; one can appreciate the miracles at the QEH. Would someone tell us about the immigrants who have contributed no taxes to this economy but get dialysis for free; or the Bajans who have lived abroad all of their lives and because they cannot afford dialysis in the US move back to Barbados to get it.

I am satisfied that this Government is taking health seriously, and I agree with the policies announced by the Minister to date. He walks the place regularly and see for himself what is happening. Unlike others, he is not a snob, and can be seen hanging around talking with all and sundry, trying to understand what is happening.

The electrical upgrades, refurbished cafeteria, upgraded doctors lounge, additional posts, two new ambulances, a new cardiac suite, getting MICU and NICU suites back in operation are a few of the facts under this new Minister of Health and DLP Government. Staff at all levels are respected and embraced. Patient care is becoming the priority. Barbados’ healthcare system is not perfect, but it certainly is good. We just need to take our own health a lot more seriously and pay more taxes towards healthcare.

Editor’s note: * The original comment said “a proper” but we think the writer meant “improper”. Decent boy, please let us know. Thanks!