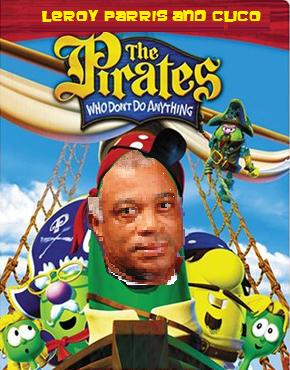 I decided to post these pictures anyway: first, to show what future renovators are up against; second, to show CLICO’s attitude toward the property.

If I may speculate upon Bajan politics, on analogy with American and British politics, I think what we’re seeing here is an extortion tactic. “Nice place you got here”, says CLICO; “shame if anything were to happen to it”. The longer they make the government wait, the more urgent the problem becomes.

… from  A Visit to Sam Lord’s Castle, 16 July 2009 posted on the website of David Ross, Texan and sometimes tourist to Barbados. The artwork is David’s too!

I would like to ask for your/the BFP reader’s help. I’m still short of responses for my questionnaire on resident perceptions of tourism impacts in Barbados. I’ve converted the questionnaire into an online format and it is available here:

As a result of our economic dependence on tourism, the purpose of the survey is to study resident (Barbadian) perceptions of tourism impacts in Barbados. The survey should take between 5 to 10 minutes to complete and will be available for one week from today. It’s anonymous, and there are no right/wrong answers, only perceptions.

Could you therefore please post the above as a blog?

‘We knew from historical records that the plantation was worked by African slaves,’ says archaeologist Dr Hannes Schroeder who led the research while working for his PhD at the University of Oxford. ‘But now we have a method that enables us to identify first-generation captives among the burials and to trace their origins back to their native Africa.’

Copper bracelet from a slave's grave.

When does taking a body from a grave become an “archaeological dig” instead of something a little less acceptable?

My great-grandfather was born before “flying machines” were invented, but before he died he watched Neil Armstrong and Buzz Aldrin walk on the moon. I never knew my great grandfather except through one old black and white photo. By all accounts he was an ordinary man who led an ordinary life, produced a few children and worked hard when work was available. He went to church and was probably loved by his family and friends and (as it says in the Bible)… “then, he died.”

All the people who knew him are gone now too. I was told where he was buried, but the wooden marker is long since gone and so are the people who could say with any certainty exactly where he rests. As far as the church plot map goes… it’s gone!

So my great grandfather has disappeared, or rather he remains where he was buried and we as a family have forgotten to remember where he is.

Would it matter if someone dug him up to learn about our past through his bones, teeth and burial clothes? Would it be disrespectful if it were done next year? In ten years? In a hundred years? When does a grave change from hallowed ground into something else?

I don’t know the answers to those questions, but I’d like to think that our ancestors who were kidnapped from home and family in Africa and brought in chains to Barbados would be pleased to know that we remember them and want to know where they once called home.