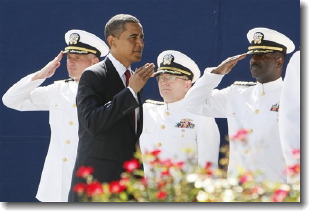 UPDATE: Controversy Over The Veracity Of This Story

One of our readers (Rohan) accuses us in comments below of running the story without additional fact checking – advising that the Washington Times “is right up there with Fox News for misinformation and straight up lies.“

Rohan should also throw in Reuters faked photos, the LA Times faked stories, New York Times faked stories, CNN and 60 Minutes as each have been caught publishing lies. Heck, Reuters alone had to withdraw over 1000 faked pro-Palistinian/anti-Israel photos so Rohan is correct… Ya can’t trust anybody and that includes CBC, The Nation, Barbados Advocate and Barbados Free Press. How many times have you read a lie or a half truth in the Nation or the Barbados Advocate? (Ha… like every day at least once!)

Which is why blogs can and do serve a far higher purpose for freedom and truth than most of the regular media – in part because of the immediate feedback and fact checking by readers. Even Reuters CEO Tom Glocer said that “The blogosphere provides accountability...”

So let’s discuss this story and see what we can come up with. (A pity that DLP supporters don’t want to discuss integrity, freedom of information and corruption stories in such detail!)

Rohan claims in a comment that the story of swords being banned at Annapolis for the President’s visit is all fake and that US Naval Academy graduates don’t wear swords… but one of the links he provides indicates that swords are sometimes traditionally given to Annapolis graduates by parents and relatives. The link also indicates that swords are worn at the Academy by Midshipmen for formal parades and occasions.

Rohan’s link to the USNA.org site also indicates that the Academy provides swords to Midshipmen for ceremonial occasions…

“Swords are entirely OPTIONAL for almost all Mids and Commissioned Officers.  While at the Academy, a Mid may only need one when performing duties as a Striper at such events as Formal Parades, etc.  Swords are NOT part of the standard Midshipman uniform.  For those Mids who need swords and do not supply their own (almost all Mids fall into this category), the Academy supplies generic swords which remain property of the Academy and are used year after year by succeeding classes.”

The site also indicates that Commissioned Officers of the US Navy may wear dress swords for special occasions – and one would think that might include ceremonies, visiting dignitaries and graduations, etc. Hey… I don’t know, I’ve never been to CanoeU.

Rohan also links to one Annapolis graduation photo showing the graduating class without swords. Again, I don’t know enough about Annapolis to know if some personnel at graduation ceremonies in the past have carried swords on stage or during the opening events, etc..

So let’s research this story a little more and see what we can come up with. Obviously, a real CanoeU graduate with some photos of previous ceremonies would solve the question.

Ok folks… here are photos of the 2006 Graduation with Dick Cheney attending and swords being worn during various parts of the ceremony, so it looks like Rohan’s comments needed a little more research on his part. Nonetheless, the question still remains – can we confirm that no swords were worn during the 2009 graduation with the President in attendance? We’ll look online for some photos, but meanwhile here is the link for photos of the 2006 Annapolis graduation with swords.

I am not a fan of “Dubya”, but to add some gasoline to this discussion, I found photos of Bush at the 2006 West Point graduation ceremony that speak for themselves. It will be interesting to see President Obama attend the same ceremony…

I don’t know why I am so upset about this story, but I am. I missed it when it broke a few weeks ago, but some Google and Bing searches show that the story wasn’t that widely reported.

President Barack Obama spoke at the Graduation Ceremony for the US Naval Academy at Annapolis on May 22, 2009 – but before he spoke, all Naval midshipmen were disarmed of their ceremonial swords and umbrellas.

Never before in the history of Annapolis has the Commander in Chief required that all Naval officers in his presence be disarmed.

Although I haven’t sorted it all out, there are reasons why this story has so devastated me and I don’t know what to think.

A standard tonic and gin will not be enough. Perhaps a martini will assist. Better make it a double. Very dry, wave the vermouth bottle in front of the glass – no closer. (I don’t fly until Sunday so no worries, Mum!)

Robert somewhere in the Pacific

29 responses to “What The !#$%!!!! U.S. Naval Academy Graduates Ordered To Remove Swords For President Obama’s Speech”