Tiananmen Square Massacre 25 Years Later: Hugs and Kisses From Barbados As We Trade Our Silence For Cash

“I have always found it shameful that Barbados – a nation founded with the assistance of chains, whips, rape and cultural genocide – now so easily supports nations involved in slavery and human rights violations.” 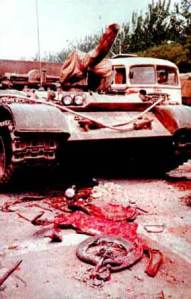 Updated for 2014: Twenty-five years ago the despots of the Chinese Communist Government sent the tanks into Tiananmen Square and throughout Beijing to crush a growing call for democracy. Thousands were murdered – shot, bayoneted and crushed by the treads of tanks. After the attacks, secret police visited the hospitals and took away the wounded survivors.

Nobody can say that the Chinese Communists aren’t efficient, if ruthless, when it comes to using the power of the state to achieve and continue in power.

And nobody can claim that the Chinese Communists don’t know how to control the press and re-write history. END_OF_DOCUMENT_TOKEN_TO_BE_REPLACED