Let me say for starters I have not read such a xenophobic piece in a long time. I am a born and bread Bajan who is capable of accurately tracing my roots for over six generations. I am deeply embarrassed that someone with your prominence in our society can pen such utterances.

My wife of over 30 years and three children are not born and bread Bajan, however, they became naturalized citizens of my beautiful country because of my heritage; yet you want to deprive them of a right that they have earned..

If you were to get your way none of my children or my wife would be able to vote in their adopted home country Barbados. This is in spite of the fact that they all pay their taxes on time – inclusive of PAYE, VAT and NIS.

Your intolerance for “foreigners” reminds is no less repugnant than the US’ most notorious media bigots, namely Rush Limbaugh, Bill O-Reilly, Lou Dobbs and Sean Hannity. 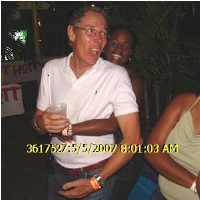 Editor's Note: Any man of Bizzy's age who can party until 8am has our respect!

By the way Mr. Williams, what do you mean by “a culture unlike ours”? May I remind you that culture is a set of patterns and traits exhibited by humans from the time of our existence and such characteristics are often used to define any given period, community, country, ethnic group or class within a respective society. As you can or should appreciate, culture is by no means static and actually it is a very dynamic process which will continue to undergo metamorphosis over time.

Here in Barbados we do not have a homogeneous culture, For the weekly paid construction worker with four children to support will never be able to sip Chivas Regal too regularly much less own a multimillion dollar yacht, however, both you and I are aware of those Bajans in our midst where this is an everyday part of life. There are some of us Bajans who prefer dancing to the dance hall star Buju Banton at Reggae Longue while there are others who prefer a night out taking in the classical violinist Patmore Lewis at Holder’s Plantation House. We are still Bajan in spite of the fact of our differences culturally.

Both you and I know that political parties here in Barbados seldom dance to the tune of the electorate as a matter of fact they are more likely to cow tow to major political financiers. Case in point both parties routinely break election promises following every election.

Mr. Williams I have always credited you with some intelligence, however, you went onto compromise my opinion when you state, “.. everyone (who was born in Barbados) and allowed to vote would at least have grown up in Barbados…”. Do you see the stupidity of such a conclusion? My Brother’s two kids were born in Barbados but migrated from Barbados when they were 3 and 5 respectively and have lived and are still living overseas for the last 20 years. However, if we were to follow your decree my Bajan born but overseas living nephews should be allowed to vote while my non-Barbados born but Bajan by descent kids should never be allowed to vote in the country they have called home for over 25 years. How utterly stupid!!!

Do you realise that if you were given your way most of out Prime Ministers wives (including PM Thompson) would never have been able to vote for their husband’s political party. Mr. Williams it looks as though that your brain was not in gear when you penned your harangue.  .

Mr. Williams how come we never heard a disparaging word from you regarding “foreigners” when Port St. Charles was being conceptualized and built or for that matter Apes Hill and the plethora of other similar projects. Was the conspicuous silence because these foreigners imported a culture that was similar to yours?

May be we are all foreigners for when our ancestors originally “discovered” Barbados some 550 years ago there were unsuspecting indigenous inhabitants that roamed Barbados for centuries who were a lot more welcoming to our fore parents than you are being to our neighbouring CARICOM brothers and sisters.

I consider myself much more culturally compatible to the foreigners you doth vehemently protest about. However, unlike you I am tolerant of the foreigners from both near and far for I see both these groups of people as having the potential to contribute in a positive manner to my beautiful island country called Barbados even it is no more than to diversify our stagnant gene pool.

As I see it, the biggest danger to Barbados in allowing foreigners into this island to work and possibly settle is the possibility of a foreign culture being able to determine how we are governed.

There has been non-stop debate about the new Barbados immigration policy announced by our Government in the press and on the call-in programmes, but I have not heard anyone articulate this possibility.

Barbados has traditionally been governed by the BLP or the DLP. The support for these two parties is pretty even and in most cases, seats in an election are won or lost by a small percentage of votes cast. If therefore we allow in and grant residency to foreigners whose culture is unlike our own, we could easily end up with a small percentage of our population that embraces a culture unlike ours determining the outcome of our national elections.

The solution to this potential problem is simple. We should only allow people who were born in Barbados to vote in our elections. This would ensure that the shift to the control of the island by a foreign culture would be much slower and everyone who is allowed to vote would at least have grown up in Barbados and had the opportunity to embrace our culture.

I hope this suggestion will be implemented and that its implementation will put to rest the fears of born and bred Bajans who are concerned over losing our homeland to foreigners.