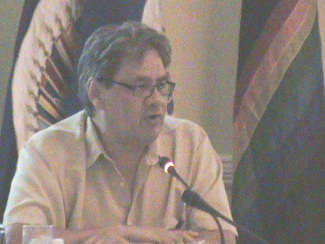 “This ‘Human Prosperity’ theme of the OAS Heads of State Summit to follow us immediately in the Republic of Trinidad and Tobago CANNOT be implemented for the benefit of the non-indigenous citizens of the OAS states at the expense of OUR Indigenous peoples – because for far too long that is EXACTLY what has been happening!”.

The 1st Indigenous Leaders Summit of the Americas was held in 2001 in Ottawa, Canada, North America, the second was in 2005 in Buenos Aires, Argentina; South America, and the 3rd was just concluded on April 15th 2009 in Panama City, Panama; Central America.

Controversy tends to follow anything that seeks to advance the long denied rights of the Indigenous Peoples of the Americas – a Hemisphere that with the sole exception of Bolivia (which FINALLY has an Indigenous President and government) – STILL suffers to varying degrees under Colonialism & Neo-colonialism – 517 years AFTER the arrival of Columbus and the ensuing Genocide, Ethnocide and Ecocide he (and subsequent Eurocentric plunderers) unleashed in the ‘New World’.

At the opening ceremony held in a conference room at the Hotel Riande Continental in Panama City on April 14th 2009 the pre-session prayer was said by a respected elder of the local Kuna Tribal Nation.

“The Indigenous Caucus of the Americas is only being permitted one brief address to the OAS Heads of State – then like dutiful servants we must leave the room, not even being permitted to sit as official observers as we were granted in previous OAS Summits.”

The influential leader Mrs. Beverly Jacobs of the Native Womens’ Association of Canada, was the first speaker to address the 100+ Indigenous Leaders from North, South, Central America and the Caribbean gathered.

This was followed by a video address by his Excellency Jose Miguel Insulza – Secretary General of the Organization of American States (OAS), and this was presented on his behalf by her Excellency Abigail Castro de Perez – Ambassador and representative of the OAS in Panama.

The Third speaker was her Excellency Patricia Lagan-Torrel – Ambassador of Canada to the the Republic of Panama; the governments of Canada, the USA, and Spain provided funds to make the 3rd ILSA possible and the OAS provided logistical support in no small part by tireless workers such as Mr. Luis Toro and Ms. Jessica Grebeldinger – both great friends to the cause of Indigenous rights.

* Readers should note that the UN declaration being referred to was passed by a vote of support of every UN member state EXCEPT the USA, Canada, New Zealand and Australia – but soon thereafter the Australian government changed and the new administration quickly adopted the Declaration leaving 3 isolated ‘Democratic hypocrisies’ still in opposition.

Fifth and last to speak was the veteran respected Grand Chief Edward John – political executive of the First Nations Assembly (of Canada) Task Group, and he provided a wealth of information to the appreciative audience gathered, but his most memorable statement – and one that reverberated around the room to enthusiastic support was when he thundered: “This ‘Human Prosperity’ theme of the OAS Heads of State Summit to follow us immediately in the Republic of Trinidad and Tobago CANNOT be implemented for the benefit of the non-indigenous citizens of the OAS states at the expense of OUR Indigenous peoples – because for far too long that is EXACTLY what has been happening!”.

As I sat in the audience, as a Barbadian by birth of Guyanese Lokono-Arawak descent, and cognizant of the fact that I was part of the planning committee for this 3rd indigenous Leaders Summit of the Americas and head of the communications sub-committee (my tenure expired as of 6.30pm on April 15th 2009 when the Summit officially ended), I was saddened to hear that the Governments of Colombia, Chile, Argentina and Brazil – were still frustrating the efforts of the Indigenous Caucus in the draft American Declaration on the Rights of Indigenous People’s process, when I had attended the last OAS session in Washington DC a few months ago the USA and Canada had dropped out of the process entirely – which is an act guaranteed to sabotage any progress we hope to make on that front due to the ‘Consensus’ requirement within the OAS.