Five years ago CLICO Barbados said they would restore Sam Lords Castle as part of a major tourist development.  Surprise, surprise… as they did in the past and have done since about other things — CLICO lied.

You see folks, this is the way it works with these irresponsible corporate beggars…

First, they spot a piece of land that they want. If, like Sam Lords Castle, it is a heritage site in need of some work the corporation promises to restore the heritage site to its former splendor — all in exchange of course for permission to develop the land. Next comes the “the condition was worse than we thought” speech. After a few years of additional neglect, the heritage site becomes nothing more than a candidate for demolition. And if that doesn’t work, well, the Corporation just leaves the place unguarded and unlocked so the paros can look after business for them. When the place finally burns down the way is clear for the development they really wanted to build.

No Integrity Legislation, No Conflicts Of Interest Standards: David Thompson Lied To Get Your Vote

Don’t expect the government of Prime Minister David Thompson to hold CLICO to account.  You see, CLICO CEO Leroy Parris is a DLP financial supporter and Godfather to the Prime Minister’s youngest daughter. Oh yes friends, you can expect a whole lot of accountability from that combination.

Oh how Barbados could shine, how our children’s future could be better, if only we had some rules against the type of corrupt conflicts of interest that each of our successive governments seems to thrive on. If we had politicians who were dedicated to preserving what is wonderful about Barbados instead of lining their own pockets and looking the other way when their friends need a favour, what a place this could be!

Have a good look at the legacy of CLICO Barbados — a company that has been given tens of millions of dollars in cash, concessions and guarantees by Prime Minister David Thompson. And yes, David Thompson is also Godfather to the son of Leroy Parris.

Anything for an old friend it seems, whether their financial statements are legally up-to-date or not… 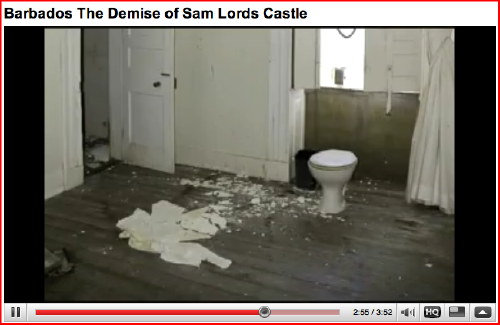