Graves Of Barbados – Respect and Love For Our Families, Our Friends and Our History… Or NOT!

With Monday’s discovery of an open pit containing burned skulls, bones and other body parts at the Christ Church Parish Church, our thoughts immediately turned to a previous article by our own Robert.

Sad. So sad. And what does it say about us?

Somebody should lose their job over this, but you know that’s never going to happen.

Here is the current story from the Nation, and then BFP’s original story…

Mourners attending a burial in the Christ Church Parish Church’s cemetery on Monday evening were mortified when they stumbled upon a hole containing burnt skeletal remains.

An upset woman told the MIDWEEK NATION that they were disgusted by the sight in the graveyard.

“I counted at least six skulls and I could see teeth, hair and bones and what appeared to be the material from a coffin,” she said.

(Read the full article at The Nation: Shocker in Christ Church graveyard)

For an absent friend, much loved.

A few days ago I visited the resting place of an old and dear friend, now passed on. I always mean to visit more often and tend the grave but life gets in the way and then I realise it’s been over a year. As we talk I clean away the garbage or sometimes plant a flower: a little something to let them know they are still remembered and loved. The difference in our ages did not exist in our friendship, but we always knew it would probably be me visiting the graveyard on Sunday afternoon.

I wrote this article after my last visit to my friend in March of 2009. I’ll leave it at the top again for a few days in the hope that it will inspire some of our readers to tend the graves of our friends and family.

“This is an entire project we are working on to get Barbadians to respect their ancestors and their graves a bit more. Family graves are important, especially if [the families’] contribution is respected; and we are even documenting and computerising the 175 000 graves and burials currently at Westbury Cemetery,” 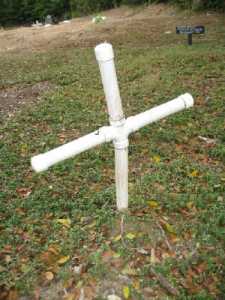 It was many years ago (although it seems so recent) that I was cutting my teeth as third man on clapped-out 727’s throughout Southeast Asia. I have written here of some of my adventures in the Philippines, Jo’burg, Calcutta and Japan. You’ll find links to a few of my aviation stories at the bottom of this article.

A friend and I were once invited to make a formal visit to a Japanese graveyard at Izumiotsu near Osaka. And whenI say “formal”, I mean FORMAL. A half an hour of “cleansing” before entering the graveyard for the two-hour remembrance ceremony. I remember how clean and orderly everything was at the tombs: plants trimmed and the path raked every hour by a caretaker. The sound of a heavy bell to summon and honour the spirits. Not a single piece of garbage or even a windblown leaf to disturb the perfection of that place where the current generations honoured their ancestors and passed friends.

So clearly I remember thinking that these “Japaners” know who they were, know where they come from, and because of that know who they are today. There is much I respect about what I have seen in Japan (and to be truthful, much I don’t respect, but that is another article on another day).

Back in Barbados my memories of that Japanese graveyard were rekindled by some photos I took in a local graveyard a little while ago.

My friends, it acceptable to be poor. At the grave sites of the poor one can see so much love that is often missing from the funerals of the monied. Handmade crosses of electrical conduit and water pipe. Plywood markers, hand painted names because there is no money for anything else. That is fine.

No one looks after the resting places of the dead.

I am guilty of this too. I have never spent time or money tending the graves of strangers. Richard Goddard and his friends have and for that and so many other selfless tasks they do, they deserve our thanks and respect.

But what you see in these photos is our national shame because it is repeated all over this island. We need to change our ways…

Don’t Put Your Hand Down The Hole! One of dozens of holes in this church yard goes you-know-where.

Burning Garbage In A Graveyard Pit!

No Money, But Love Makes An Electrical Conduit Cross 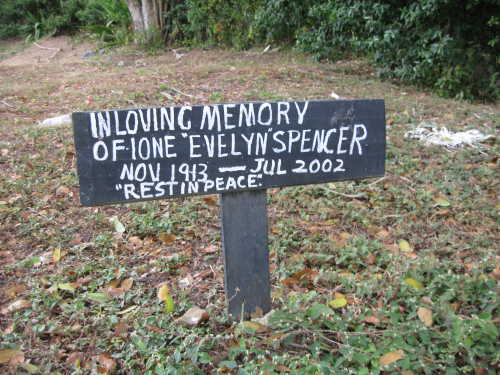 Evelyn Spencer – A Kind Woman Who Was Much Loved

A Few Stories From Robert…

29 responses to “Graves Of Barbados – Respect and Love For Our Families, Our Friends and Our History… Or NOT!”