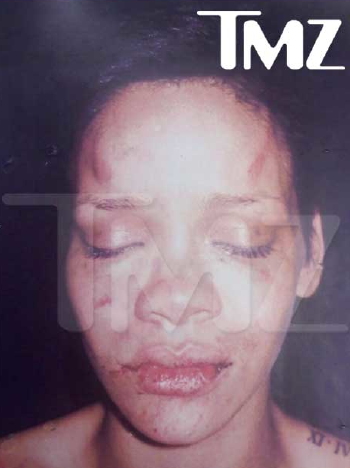 Los Angeles Police have launched an investigation into the leak of a photo of Rihanna which the police say “has the appearance of one taken during an official Domestic Violence investigation.” Meaning, yes this is a photo of Rihanna taken after Chris Brown “allegedly” beat and bit her. The photo first appeared on TMZ but now it is everywhere.

Somehow I don’t think that Chris Brown will ever show his face in Barbados again – ever.

What a monster he is to do that to a woman – but in truth Chris Brown did no different than has been done by hundreds of other men on Barbados. And now an entire new generation of young men have been raised on song lyrics that portray women as objects of pleasure and domination.

Not to mention that here in Barbados, if you beat your woman in a gated community, she can scream for help all she wants but the police won’t go past the security guard at the gate. After all, its only another ho gettin’ wat be deserved by she.

Beat Your Wife In Barbados? You Are Protected From The Police If You Live In A Gated Community!

From Barbados To Canada To China: Joy-Ann Clarke Wanted An MBA But Discovered The World

“The past year has exposed the vastness of the world. Before attending Ivey, I had been content to stay in my ‘safe’ environment, where the majority of the people who I interact with have similar backgrounds and experiences to mine. However, I have come to the realisation that there is a large world out there to discover. This was highlighted by my recent class trip to China. In fact, if someone had told me a year ago, that I would have visited three major cities in China, it would have been a huge joke for me.

The impact of this experience was seen when I returned home around Christmas time. I found that I was seeing the familiar circumstances with different eyes. My MBA experiences had changed my way of thinking and as a result had changed the way in which I saw the world. In many ways, I will think about my life as ‘Before MBA’ and ‘After MBA.’ This year has been an amazing experience for me. As it draws close to an end, I am excited to see what my future holds. However, on graduation day, it will be bittersweet because it will signal the end of an amazing part of my life.”

Who Was Gilberto Eastmond’s Barbados Grandfather?

Colombian Interested In The Birthplace of his Bajan Grandfather

Once in a while we receive requests to assist folks looking for their Barbados family roots and we’re happy to help when we can.

Gilberto Eastmond from Colombia says his grandfather was Bajan. He hasn’t told us his grandfather’s name or if he knows it, but we are a small nation and perhaps someone can assist him. Or perhaps he’ll see this article and provide more information.

Barbados is a small island, and with the internet the world has become very small too.

Breaking News: Barbados Four Seasons Development About To Stop, Lay Off All Staff

Our original story published 16 hours before the oldstream media…

Right Now – Consider It Only A Rumour, But From A Good Source

A source who has been proven 100% accurate with Barbados Free Press over the last year says that the developers of the Barbados Four Seasons project are going to lay off all their staff (local and foreign) tomorrow and pay everyone what is owed. The rumour also says that the developers “owe lots” to local suppliers and “will make an effort” to pay them off over the next few months.

Have BFP’s readers heard anything one way or the other?

Someone please give the developers a call and tell them that we’ve put this up. They can reach us through email (barbadosfreepress “AT” yahoo.com) or by posting in this story’s comments section.

Hmmmm…. didn’t we just see government officials struting around the project for a photo-op a few weeks ago?