Would Barbados Newspapers Have Enough Courage To Print This Advert? 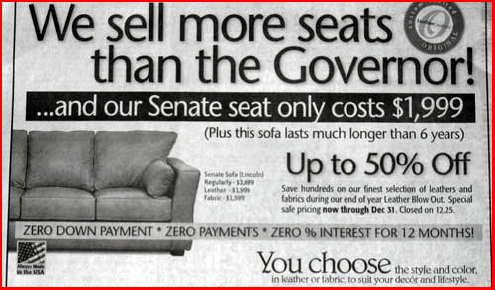 No matter what you think about the United States in other areas, you have to love the good old US of A when it comes to Freedom of Speech and Freedom of the Press. Illinois Governor Rod Blagojevich got nailed for trying to sell President Barack Obama’s vacated senate seat – which is a big no-no. The trial has yet to be held (probably years away), but that doesn’t stop the people or their news media from talking about the story and even mocking Blagojevich.

Contrast that with the lack of detailed news reporting about the so-called “investigation” into Hardwood Holdings by the cowardly eunuchs of the Thompson government. Will the news media criticise Thompson or Mascoll over their agreement to let sleeping dogs sleep now that the election is over?

Not a bloody chance.

Can you imagine a Barbados building supply company running an advert about “hardwood” that mocked any of the corrupt company principals or the corrupt politicians at the center of that scandal?

Not a bloody chance.

Thanks to FailBlog for the photo and story.

Clico and Barbados: So Many Unanswered Questions, So Many Suspicious Activities By Government And Friends Of Government

“Wife came home last night with the story on how the whole CLICO thing unfolded for them. Seems some one in the Bahamas had 100 million invested with CLICO and needed the money back, because they (Bahamas) were in tights!

CLICO doesn’t have 100 Big Ones sitting around to handle large redemptions, and couldn’t borrow that from any Bank in T&T and so was forced to approach Gov’t.(central Bank) to cover dey ass. Word then got out about this ‘failing’,  and a run started.”

“On another topic – what I “discovered” about CL Financial is that it is a PRIVATE company and evidently does not publish financial statements available to the public! How can a financial institution, particularly one of that size, NOT have to publish its financial reports? Anyone who invested one cent in that group deserves to lose their funds. That situation is a total disaster and should not be allowed to happen again.”

… above taken from some emails making their way around in Barbados.

Barbados Central Bank Bailout – In Exchange For Exactly What?

The story that is being given to the Bajan public is that CLICO’s Barbados interests and subsidiary are entirely independent from the troubled Trinidadian parent company and therefore we Bajans shouldn’t worry. Oh… “they” say that all those millions that the Government of Barbados pledged to CLICO’s benefit are “just in case” and “to show faith” in the company.

Barbados Money Laundering Advisory this morning points out some of the false information that we are being told about CLICO Barbados.

For instance, did you know that CLICO Barbados made loans to the Trinidadian head corporation for US$50 million? That my friends is over 10% of the insurer’s asset base that is probably worth less than nothing now.

To Whom The Benefit?

Barbados Money Laundering Advisory’s concern with where our bailout money is going is reflected in the email displayed at the top of this article. CLICO parent company CL Financial is a PRIVATE company that publishes no financial records publically.

IF you had control of where your personal tax dollars were invested, wouldn’t you demand full disclosure before you loaned money to a private company? Wouldn’t you want some real and unencumbered collateral to back the loan?

CLICO Barbados owns some rather nice land that just happens to be smack in the middle of the proposed Graeme Hall National Park.

The Barbados Government should not have loaned that money to CLICO – they should have purchased that land for the people of Barbados!

Too bad that Prime Minister Thompson couldn’t exert any pressure on his old pal Leroy Parris. After all, we’d hate to have to give up those free rides to New York and Miami on CLICO’s business jet, wouldn’t we Mr. Thompson?

BFP: Clico On Life Support – Will Barbados Prime Minister Thompson Favour His Patron Leroy Parris, Or The People Of Barbados?